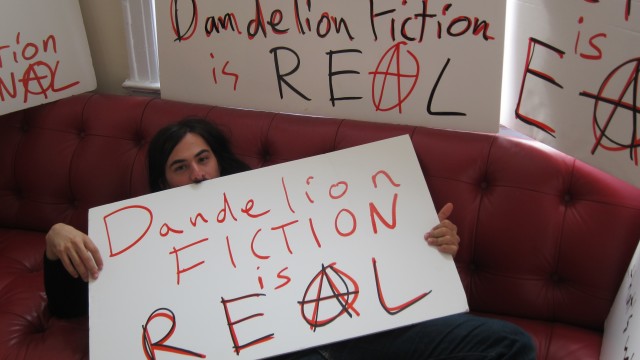 Peter told me how all of his names came to him in a dream. Wolverine was Weapon X and also Logan and even James Howlett. Different heros and villians would call him different names and bear on the narrative. Wu-tang all have different nicknames which when invoked cause different inflections in the poetry. let me see if i can explain my different super-powers; i’ll retreat to the lowercase to emphasize the soft privacy of these reflections.

Dandelion Fiction when i started to make music alone, the aesthetic transformation of my given name became dandelion. obsessed with stories, with urban legends, with untruths. sensuous improvisation on homemade instruments and experimentation eventually gave way to concise vocabulary and narrative: bass guitar, daxophone, voice. punk rock and storytelling. songs took years. somewhere online there is an album released on jewish noise.  zach joined initially on drums, and started singing with me in the quietest voice. (it always seemed to sound quiet even when he was screaming) i dreamed of asking jonathan nocera to join our band, but he died. i got hearing damage, but we were still loud. zach and i made careful messes and the project suffered under the burden of organic sprawl adjusting to the weight of two—an EP left unfinished.
Löwenzahn when i lived in berlin i dreamed of making techno music. dandelion in german literally means lion’s tooth; i was delighted to hear how tough this sounded. upon returning to bard college i spent endless hours with the serge modular synthesizer, sculpting the sonic clay into sprawling recordings. any non narrative excursions in synthesis still make sense as lion’s tooth to me.
D. Fiction you are here now. mostly it felt natural abbreviate dandelion when i started rapping.
Daniel Prince became my stage name for net art, for facebook poetry, for anonymity. once i interviewed all my ex girlfriends on a livestream. prince is my mother’s maiden name and it makes me feel closer to her. i like having this name set aside for projects that don’t involve music
Shlomo Reuven is my hebrew name and my father’s; unused.
Dead Lion dandelion fell asleep for a long time because zach got busy, and it felt unnatural to do the same thing without him. i was asked to perform at a “modular synthesizer solstice party” and said yes, despite having no synthesizer.  i made my own synth in the style of daphne oram, using photodiodes to capture the sawtooth waveforms from oscilloscope screens. dead lion is the dark shadow of dandelion fiction. dandelion was obsessed with sing alongs, in dead lion i turn my back to the audience.
Daniel Fishkin is my given name. i felt this sounded clunky and not like myself for a while. now it feels like normalcy is just another shroud, so it is worn when needed, when talking to journals, when fighting for tinnitus advocacy, when giving and receiving,