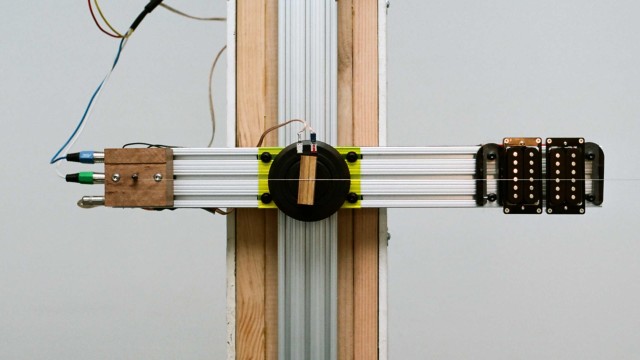 In January 2014, I organized an installation and performance series with Joel Clark at Nothing Space in Brooklyn.  I worked with my visual collaborator Oliver Jones once more.  For this version of the Tinnitus Suites, I wanted to create less trash; previous versions of the Lady’s Harp were mostly improvised in order to fit the specific needs of installation. These older instruments were built over a lengthly experimental period, used for performance/recording, and afterwards destroyed. I approached Spencer Wright, a talented engineer with a background in metalworking and industrial design. He told me about 8020, a proprietary (and expensive) system of machined aluminum extrusion.  I designed a flexible system that would allow me to attach pickups and transducers to the harp frame with lasercut plexiglas, and then configure the pieces in whatever way I desired.  In this system, the positions of tuning hardware and electronics can be changed easily. 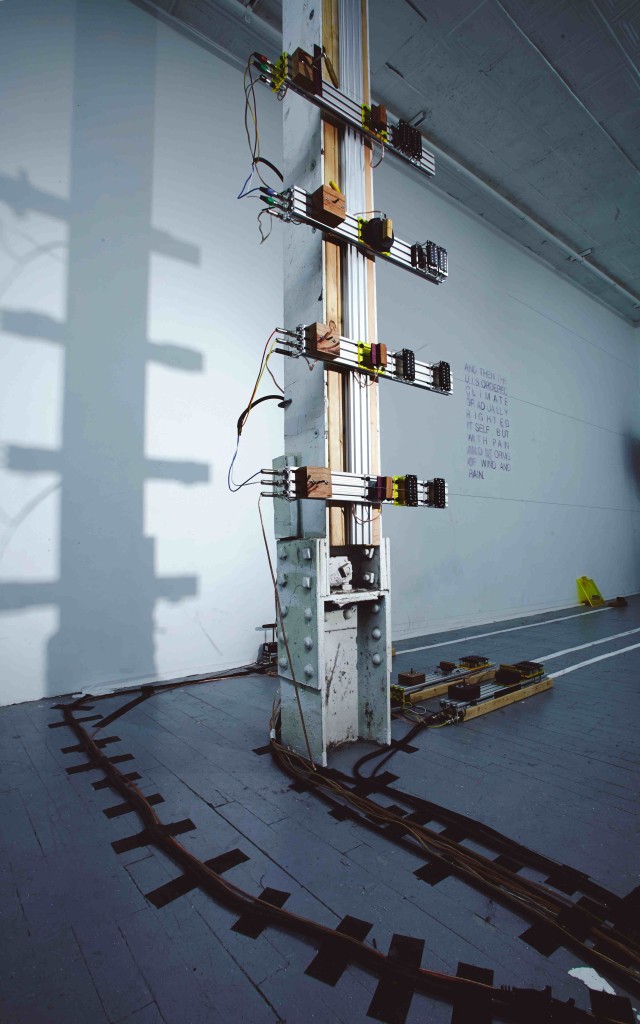 This was the first instance of standardization. I had used surplus transducers from Parts Express, but the stress of the sustained feedback would eventually burn out their voice coils. Previously, the pickups were handmade or salvaged (from craigslist, or from a solenoid air-valve array). This time around I used identical pickups—Chinese humbuckers from eBay, and I designed the hardware attachments to accept specific devices.

Incidentally, this all happened in the middle of the great Polar Vortex of 2014, right after New Year’s.  I was working on a tight deadline to put together a totally theoretical system—I had no idea anything would work. The weather destroyed the Northwest mail system; everything was delayed. 8020 redlined a shipment of the machined aluminum to me overnight, and then, weeks later, the original shipment showed up. Thanks for the “grant” 8020.

The previous Lady’s Harps were parasitic—they attached onto existing shelves and walls and used those limitations to determine string length, position, and the aesthetics of the instrument. But, Nothing Space was a white room. I went right for the biggest imperfection in the room—a steel I-beam which ran through the floorboards into the center of the gallery. I glued together a chunk of wood to sit inside the I-Beam and function as a soundboard, and then anchored the harp-modules onto it. Thus I anchored the strings into the building itself. I had tried to mount another four strings across the room, on a drywall partition, but the tension of the strings destroyed the wall. I was running out of time and needed to finish installing in time for the first weekend of performances, so I screwed the remaining four modules right into the floorboards.

I had been searching for a new way to play the Lady’s Harp ever since the last version in 2012. I was never satisfied with the metal slide mallets we used to play the harp back then—it felt too guitaristic, and the music that came from these “big frets” didn’t feel like the Tinnitus Suites. Oliver had brought in a cache of old wood that he pulled from the rotting windowsills of his house, and hung them on the wall as a component of his visual work. While we were talking, one of us lifted a hunk of wood and rested it on the strings.  It wobbled back and forth, making beautiful rhythms and patterns.  Was this our eureka moment? Fred Frith mentioned once that he turned the guitar horizontal as a method of treating the guitar less as an instrument and more of a sound source.  I’m not sure I’m in this territory. But I do know that by placing objects on the strings, we were able to walk away from them and listen to their subtle shifts amidst the feedback. It felt more like hearing what the system is doing, rather than trying to coax sounds out of it—less like playing, more like placing. Balancing the object is like setting a capo on a guitar, except that the object will dance along with the vibrating string. 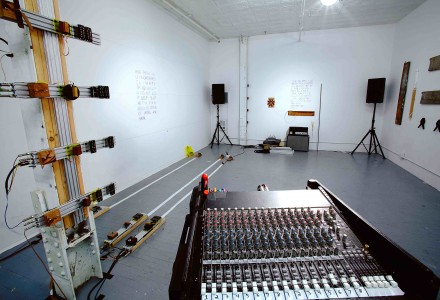 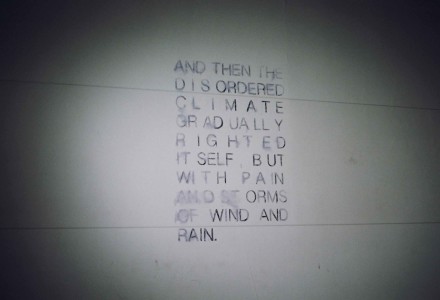 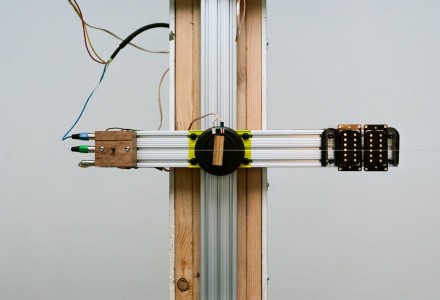 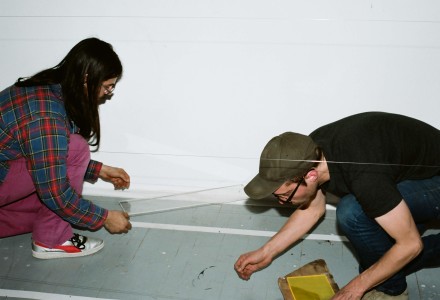 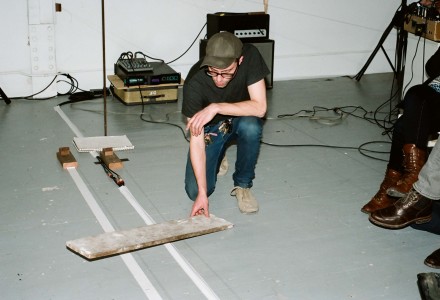 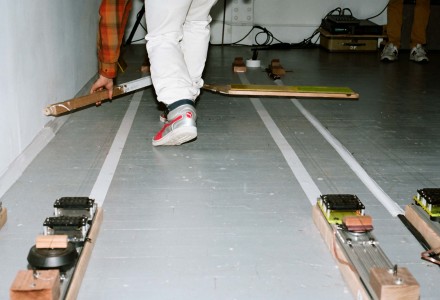 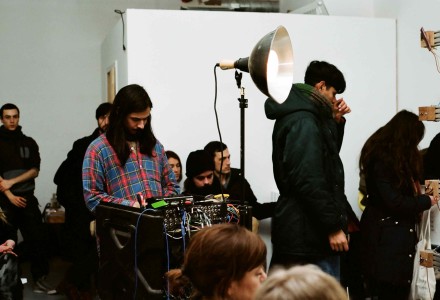 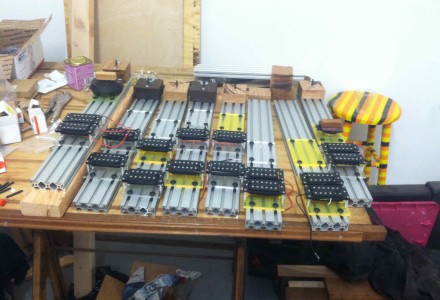 The Lady’s Harp is not a self-playing sound installation—to make the Tinnitus Suites, I must be present to perform it—to stand behind the mixer and twirl the knobs that give the feedback its shape. I organized a six nights of performances at Nothing Space, to contrast my work with other artists I admired working with the larger theme of disability/damage. For the first weekend, G. Lucas Crane and Crichton Atkinson performed. It was loud, of course; I was looking forward to four more performances by stellar artists, including Laura Miller, Boom Bat Gesture, Carolyn Lazard, Ryan Soper, Vio/Miré, and Beuys Club. On the Sunday following the first two performances, I found the following note taped to the door, in addition to an Eviction Notice from the landlord. He had received fourteen noise complaints from other tenants in the building. The concert series was far too loud and our only way to avoid eviction would be to cancel all future events in the gallery. 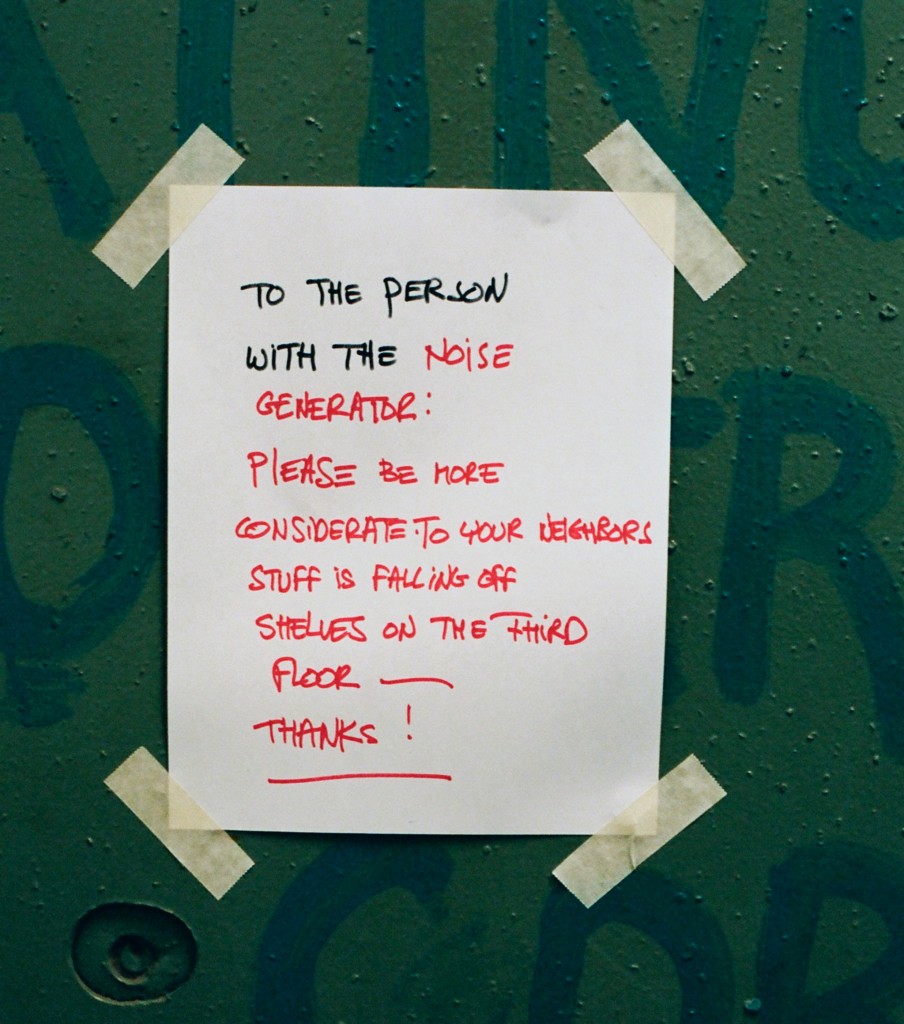 Philistines. If only I could evict my tinnitus on similar charges!

…Only joking, of course. This was just a perfect reminder of why I started doing the project in the first place. The show was cancelled, and once again I dismantled the Lady’s Harp, already making preparations for the next iteration.

In the Spring, I finally created a portable version of the Lady’s Harp. I built a 20 foot long collapsible frame, which can be reassembled and set on top of sawhorses.  I tested an installation of this freestanding version under a 3 day window and found I could build entire system in 48 hours. All the logistical problems of the previous 3 versions had been solved. In this configuration, Lady’s Harp seems to suggest a musical instrument rather than art installation. I’m not so comfortable with this shift. In fact, I prefer nearly every aspect of installation to instrument. I love the slow hand that installation forces. In building a version of Lady’s Harp, I often spend weeks in silence (hehehe jk), building the instrument and preparing for its music simply through imagination. But, when the gallery shuts down, or when your install window is dishearteningly small, the limits of installation call for practicality.

In June 2014, I was awarded a residency by Bowerbird and the Knight Foundation to stage a new version of the Tinnitus Suites in my hometown of Philadelphia. Five sound artists were invited to stage new works in the 7 story chapel of the Rotunda.  The Sanctuary was sprawling and sounded amazing. So, the Lady’s Harp had a new home for 4 months. I initially considered making a new harp from some of the hundred derelict church pews which adorned the walls of the dilapidated sanctuary, but the building manager declined to let me make (semi)permanent modifications to the historic wood. So, I returned to my modular construction. 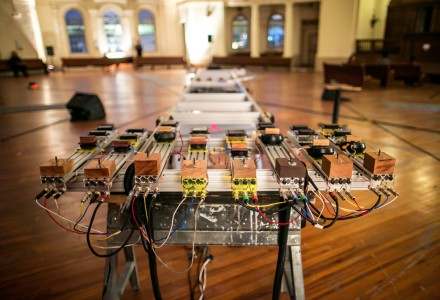 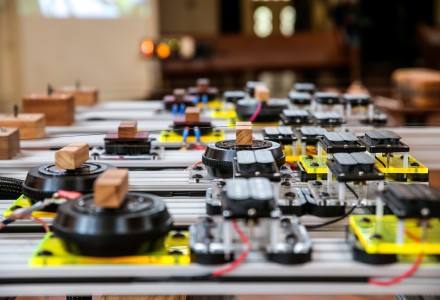 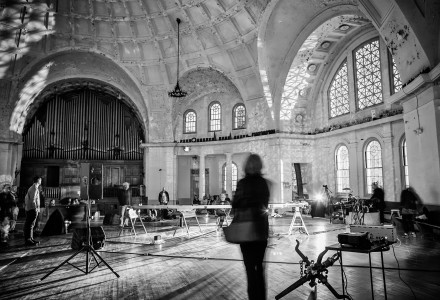 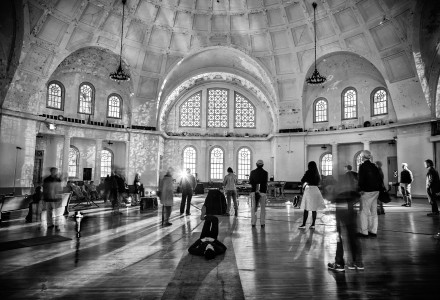 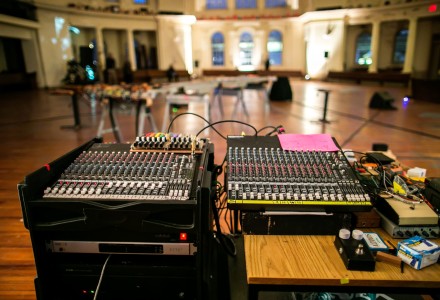 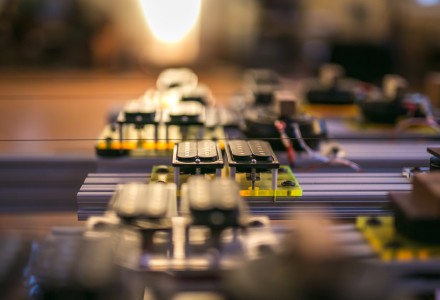 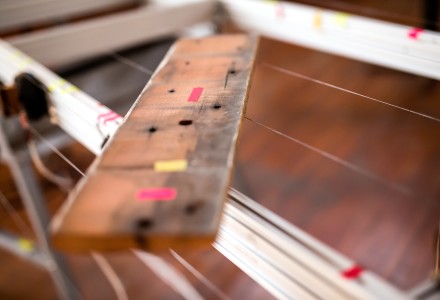 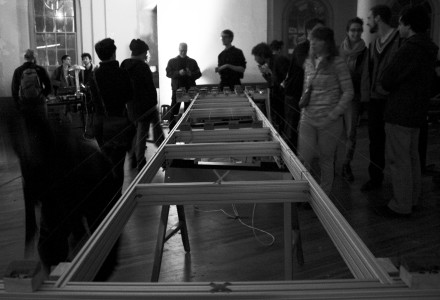 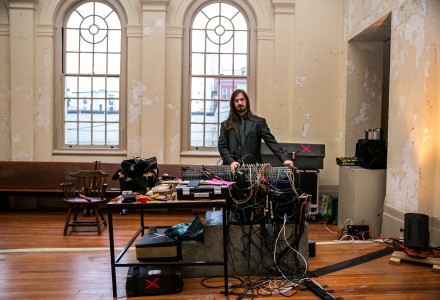 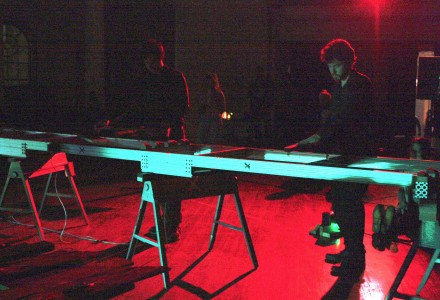 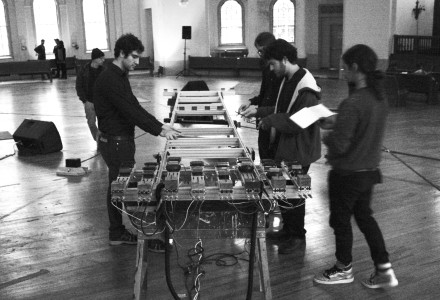 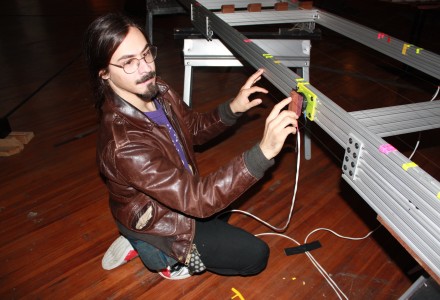 Never before had I been able to stage the Tinnitus Suites on this order of magnitude—Sanctuary offered me unprecedented access for rehearsals and experimentation.  I worked with a new ensemble featuring Adam Johnson, Gabriel Greenberg, and Noah Rush, whom I had met that year at Wesleyan. Over these months we developed an improvisational vocabulary based on the “placing” techniques I had explored in January. This culminated in 3 concerts in early October—two solo concerts, and one ensemble concert. 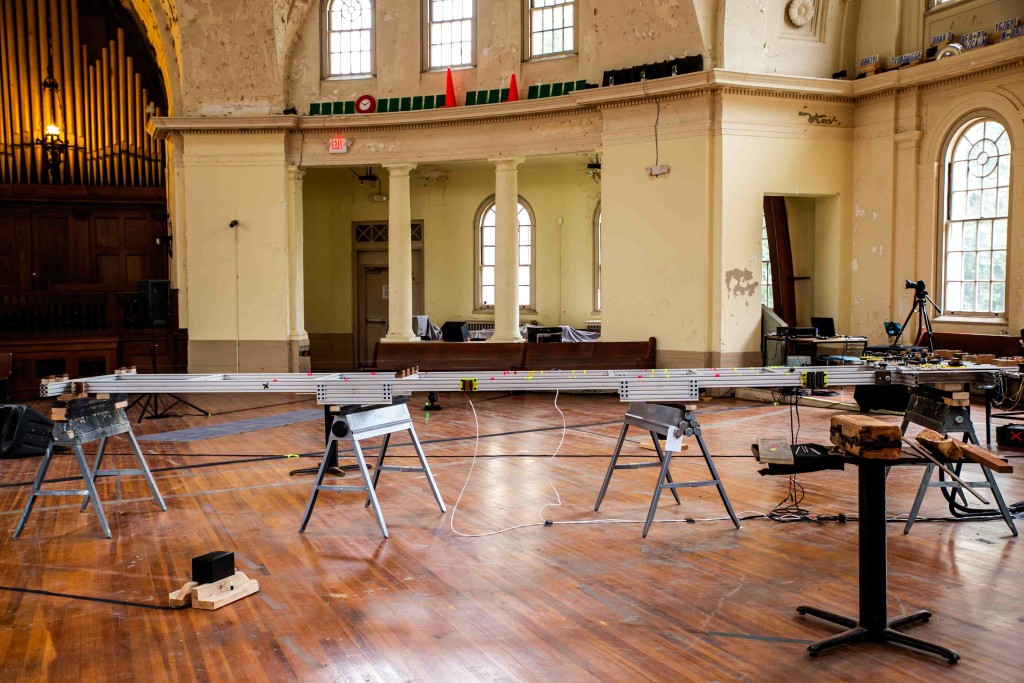 There’s a lot of information I’m leaving out.  The Tinnitus Suites was almost profiled on international news; I got food poisoning; I spent months developing (and eventually abandoned) custom software to make a self-playing version of the Lady’s Harp. An entire theatrical collaboration with Boom Bat Gesture began, manifested in performance in May, and had dissolved by the fall. We were supposed to play in the Deep Listening Festival, but I got strep throat and had to cancel. Later in October, the final performance for the year occurred at Wesleyan University as a part of my thesis research.

Here’s a picture from that final event. 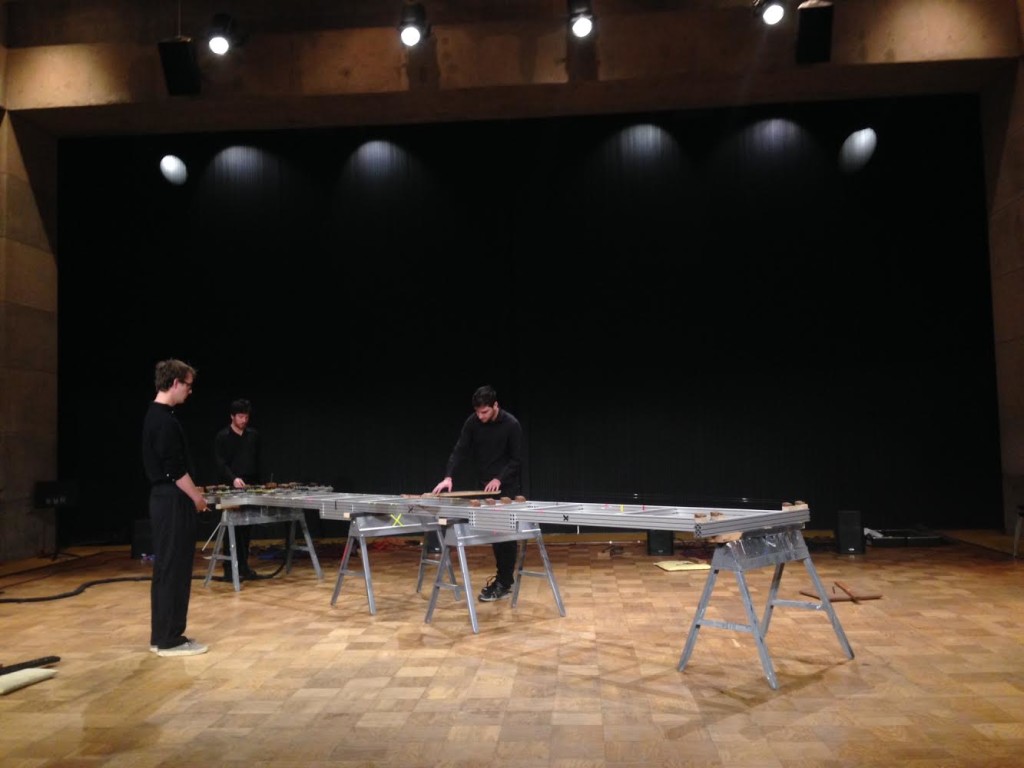