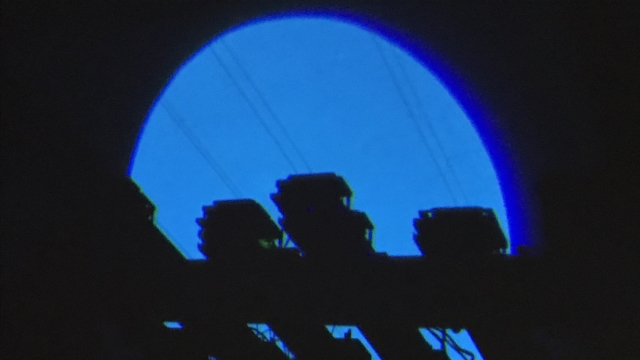 Under the auspices of Moon Young Ha and ensemble mise-en, I was invited to a residency at mise-en place in the early days of 2020, before the Coronavirus spread across the USA, inducing a lengthly quarantine. This was a momentous occasion for me, in some ways—the first time I mounted Composing the Tinnitus Suites since 2016.

(this video shows some excerpts from the forthcoming album.) 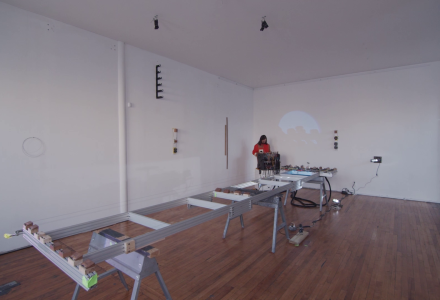 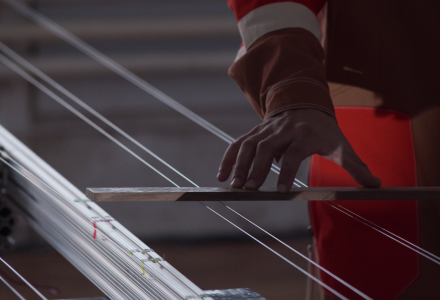 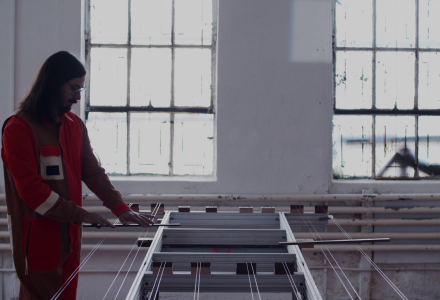 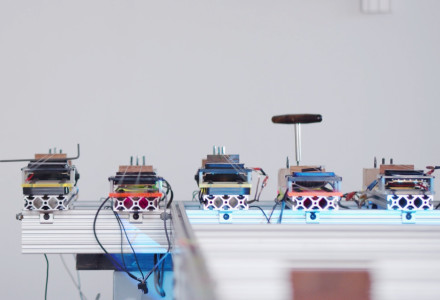 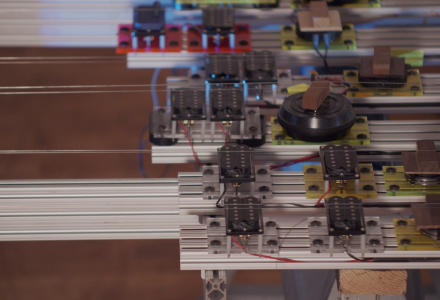 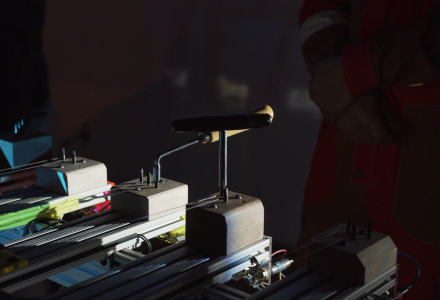 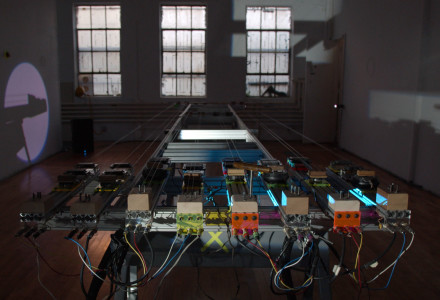 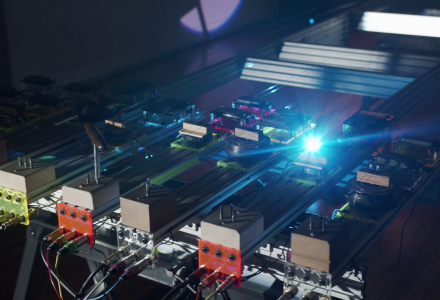 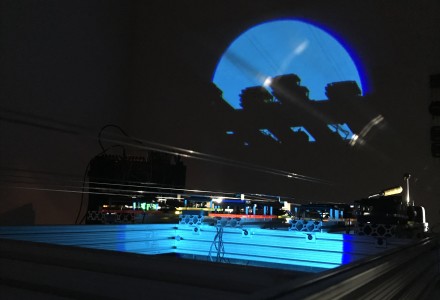 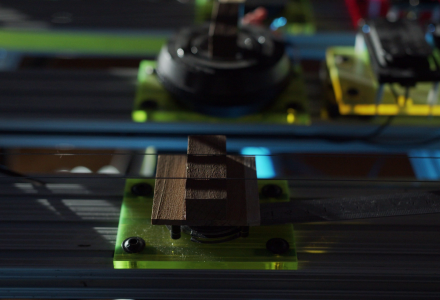 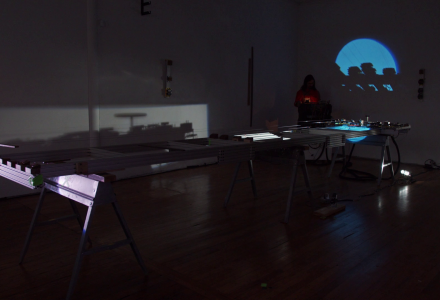 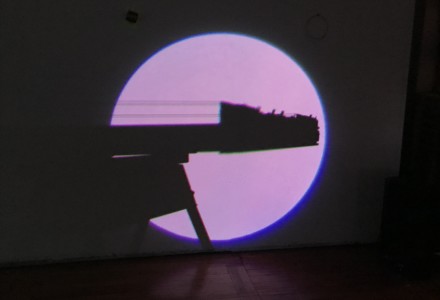 After a two week installation, I performed twice, and documented. One thing I explored significantly in this installation was abiding by more strenuous tuning principles, focusing on just intonation and getting systematic about it. It took at least a week for the muscle memory to come back. I also explored “preparation” for the first time, using small pieces of metal to enhance the magnetic field that governed the feedback loop. for each performance, I had a surprise guest (G. Lucas Crane and Ron Shalom), who emerged from the audience to play the harp with my wooden capos. Lighting Design courtesy of Chromadetic! Each concert was preceded by a short speech, read by Samuel Lang Budin and Catalina Jordan Alvarez, but written by me! it follows:

statement on COMPOSING THE TINNITUS SUITES: 2020

I want to compose music that makes tinnitus desirable rather than despised. I do not want to get used to my hearing damage—I want to use it.

Listening to tinnitus is listening to the fundamental instability of one’s own listening. If the music is dangerously loud, I may be hurting for days afterward— and donning earplugs only intensifies the ringing sound. So, any musical situation that doesn’t incorporate the hearing damage as an operator is intrinsically out of tune. For me, being out of tune is not just about the tension of strings, but the consonance of ideas. I can’t stop my tinnitus, but I can tune myself to it.

Composing the Tinnitus Suites is not a strict series of musical works but a gerund, a disposition toward life, and a thing that happens when I play the Lady’s Harp, which you see before you today. Starting in 2011, I see this work as ongoing, and part of a lifelong oath I made to make the Tinnitus Suites as long as my ears ring.

The last episode of Composing the Tinnitus Suites was three years ago. What happened? Somehow, to my surprise, during that time, my tinnitus invaded my listening reality much less than in the past. Was that the reason for this project’s three-year break? Sometimes days would go by without hearing my ears ring. And, when I would notice them ringing, it was like an old friend stopping by, or to risk being metaphysical, like I was getting a message from God.

Just four weeks ago, I was composing late at night. I was wearing headphones, which is already a cardinal error—I knew this was a bad idea, but I was Icarus at 3 am, soaring towards perfection on triangle waves. Anyway, you can guess the rest of the story: The sound got out of my control, somehow, and I blasted both ears at full volume. I tore off the headphones and wept. My head felt stuffy and everything sounded close. I regard these incidents—acoustic trauma and subsequent panic—totally differently now, for I know that I can worsen the perception of damage by focusing on it, by worrying about it. In other words, having tinnitus is not just hearing your ears ringing, but fearing your ears ringing.

I’ve chosen to live my life in sound, and it’s tempting to think of this event as an occupational hazard, but I don’t think I’m alone in feeling the struggle for sonic agency. I went to bed, and hoped everything would resolve in the morning. But when I woke up, while my left ear had normalized, my right ear was totally frayed—it hurt to hear myself talk. It still hurts, actually.

Episodes like this are major narrative developments in Composing the Tinnitus Suites. They are important reminders that things are not as they seem, that the pink days, weeks, and years passing without HEARING TROUBLE are just a momentary reprieve. That I’m already losing my hearing, perhaps too slowly to notice, but still, embedded inside a process.

Maybe I don’t hear it sometimes, but Tinnitus is always there, and if it isn’t changing, I am changing, coming with the days, closer to it.

That’s all for now…stuck in quarantine, like the rest of the world. But it’s quiet here, good time to listen to my tinnitus and think. The Lady’s Harp has become too heavy for me, at 34, and I long for a new instrument which is not so vexingly heavy. This shall be the Baby’s Harp—a lightweight, elegant instrument, one that can travel and set up more gracefully. I’ll leave you with a little scrapbook I made to remember favored angle and chords. 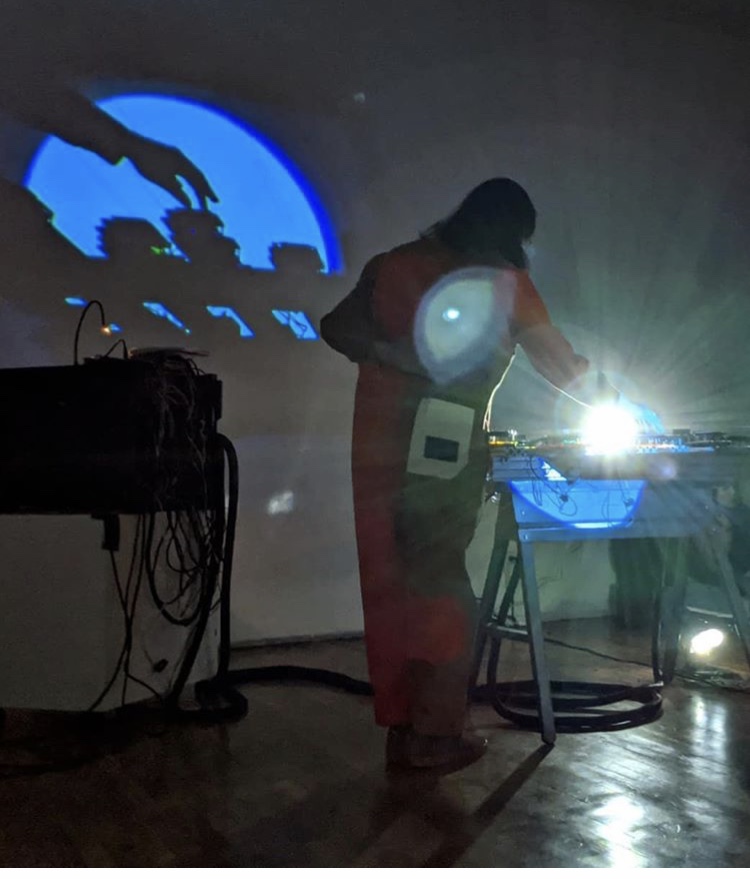