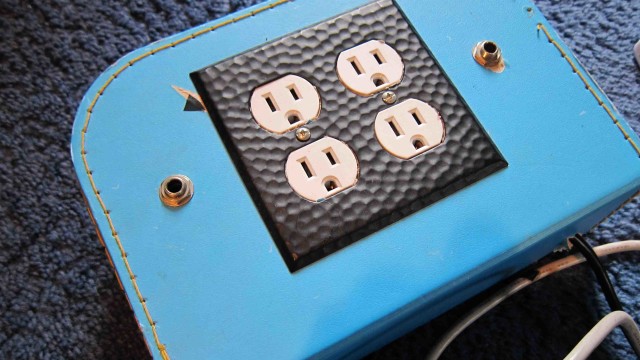 Over the years, I’ve been interested in interactions between solid-state relays and sound. Most people who get interested in electronics start out with low-voltage systems for safety reasons. Playing with SSRs was a chance for me to mess around with the wall 120v system, which was dangerous and exciting. There’s also just something magical about flickering lights. 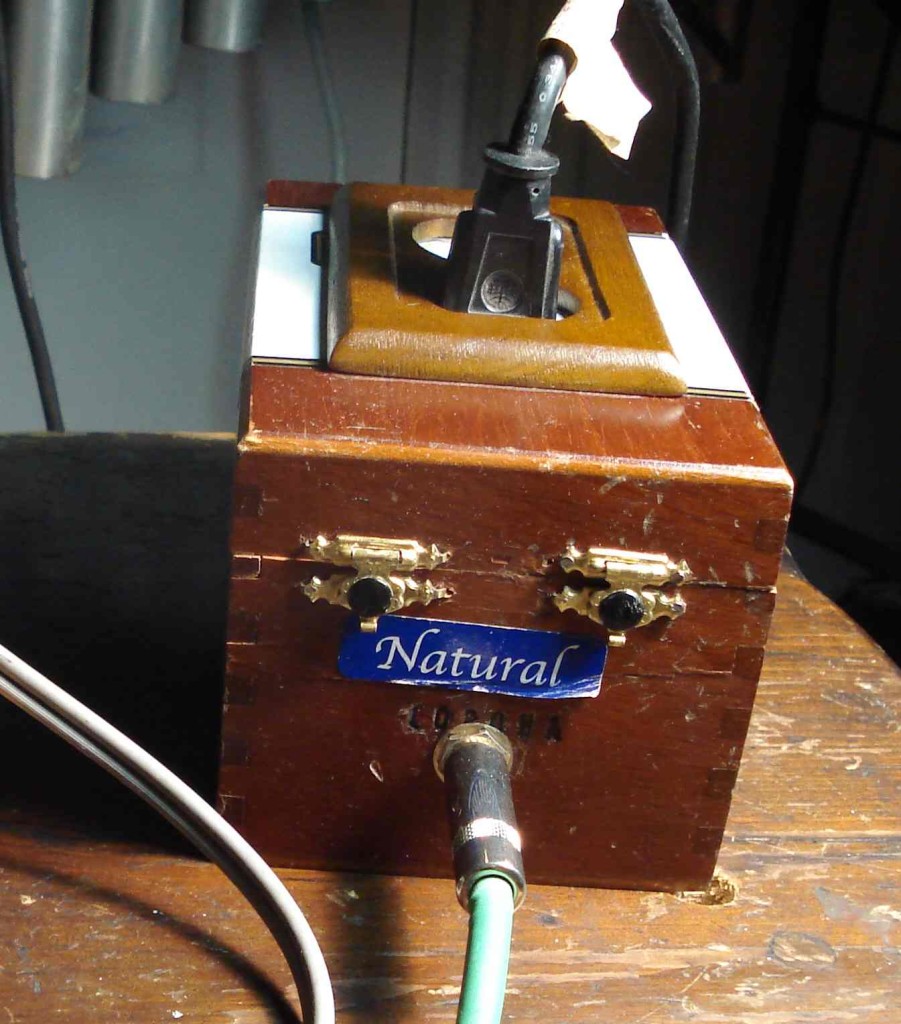 The first lightboxes were crude devices which modulated line voltage with audio signals. 1/4″ input, 120v output. I often used these devices in live performance, sneaking them onto my live table and feeding them from a headphone output or aux send.  by adjusting the bias, I could set their “quiescent state” to be lights on or lights off.  This helped me be sneaky.  I liked to plug in a lamp on stage with me, and during an emotional moment in the set, i’d sneak the signal over to the lightbox, causing the lights to flicker in response with the music. then, i’d turn the feed off, and the light would return to being normal, leaving the audience to wonder “what happened with the lights?” 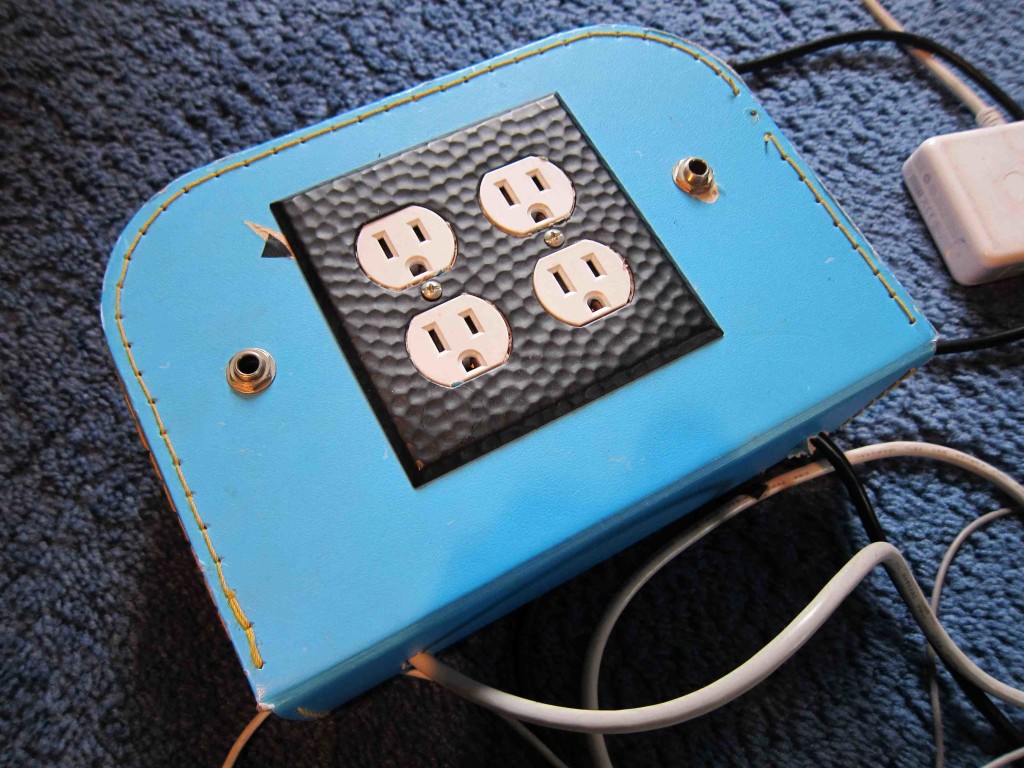 The next lightbox began when Dandelion Fiction visited Brendan Glasson in 2011 to start work on our unfinished album, “you’re a lion”. Brendan had found a weird device at a thrift store, the lights and sounds of christmas, that could bounce lights off an on in time with the cheesy music that it played. Brendan remarked that he didn’t really care about the songs or patterns it generated, but it would be wonderful to be able to flicker lights as a way of adding ambience to his set. I said, hey, give me, and I’ll modify it so it does whatever you want.  We pledged to trade “engineering hours” for studio time.

the lights and sounds of christmas

I didn’t get around to starting this project in earnest until 2013, although I started working on the code in 2012. At around 60 hours into this project, I realized Brendan would never, ever redeem this cool machine, no matter how beautifully it functioned, with commensurate studio time.  Anyway I think Brendan has forgotten about our barter.  I gutted the system and went straight for the SSRs inside.  I found six SSRs, and I thought this could correspond perfectly with the analog inputs of an Arduino Uno (actually, back then, a Duemilanove).  I began to write code.  For a few years I had no idea how to actually finish this project, even though I had many different functional blocks of code. 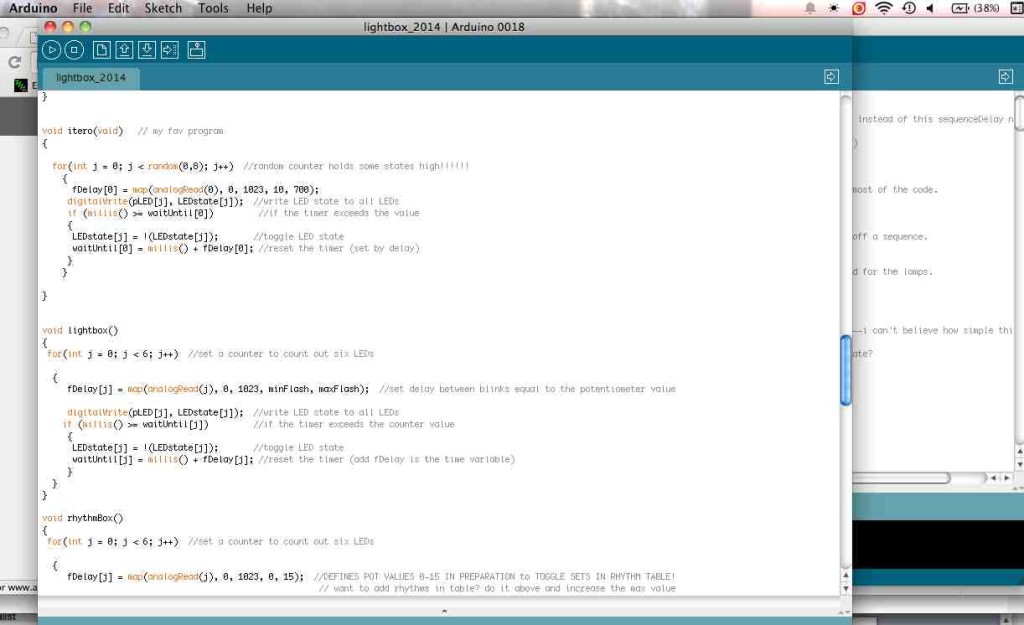 Finally, in the summer of 2013, I built the case and wrapped up the electronics for it. It was a nightmare and a pleasure to squeeze everything into this tiny box. I built an Arduino boot-loaded AVR on perfboard, and even made my first linear power supply—no batteries in here! I saved the fuse and transformer from the original circuit. My then housemate Brian Blomerth did the design on this box, which revolves around some weird narrative about his smoking dogs. I had developed several different programs, and with the help of Tom Swirly, I finally wrapped them up in a primitive one touch button UI. 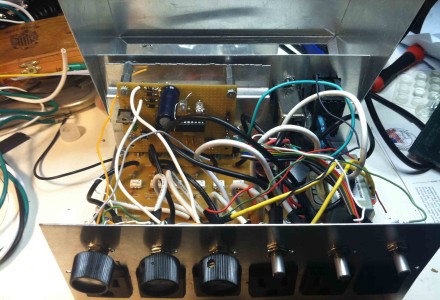 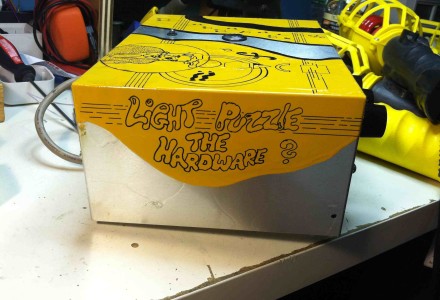 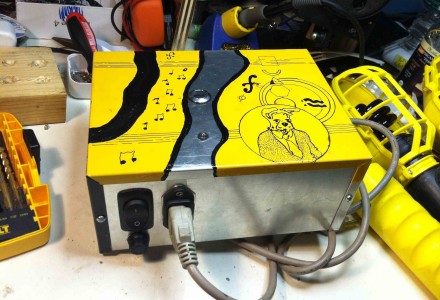 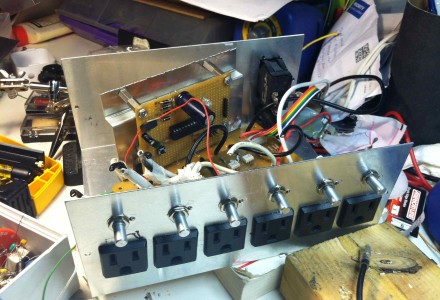 While the first series of Lightboxen were audio-reactive, this recent modern incarnation, while much more developed, is monolithic, with no interaction between sound and light explicitly possible.  To coax out diegesis, I use this machine with my band dead lion, and the photodiodes turn the flickering of lights into musical rhythm.

Here’s a video of the newest lightbox controlling some worklights and a dremel, along to Brendan’s music, which is the way it was always meant to work.