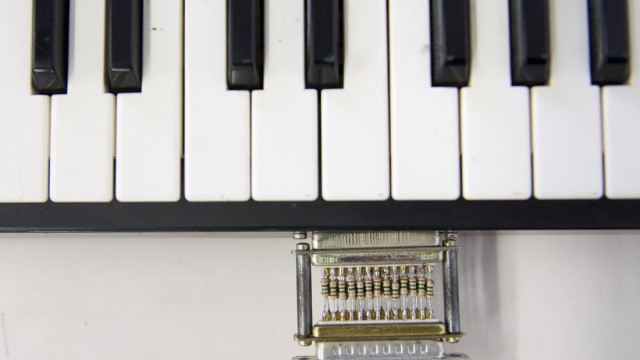 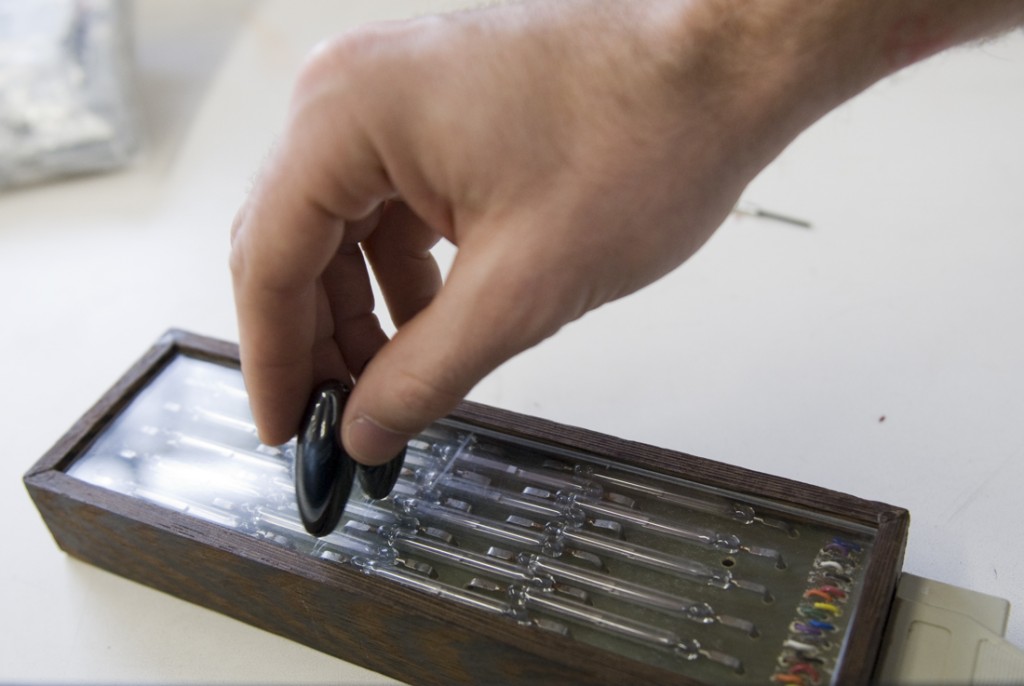 In 2007, I found a huge pile of circuit boards covered in reed switches being sold at a criminally low price at my favorite upstate surplus haunt, P&T surplus. A reed switches is a wonderful little component nearing obsolescence today. it’s a switch made out of two metal filaments sealed in a glass tube. When you put a magnet over it, the filaments snap together and make a connection.

This action sounds like tiny grasshoppers when you listen to it. At first I was just excited to listen to the tiny clicking sound, but after having them in my life for a few months, I realized they could be used for as an expressive tool for circuit bending. A friend lent me his old Casio MT-240, a keyboard with a nasty reputation for circuit-bending. It even has primitive MIDI capability!

Now, usually I don’t like circuit bending, because I want to create my own systems. But I thought that the idea of controlling the bends by gliding magnets through the air could be an interesting comment on normal bending. I liked the collision of a fluid gesture as it meets the switches, which only give you a YES or NO output. Essentially, I see this project as a magnetic prepared piano—I like to use magnets of different sizes and shapes to make different music. 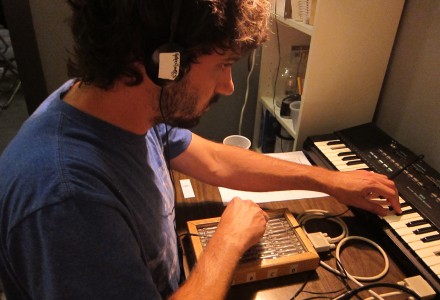 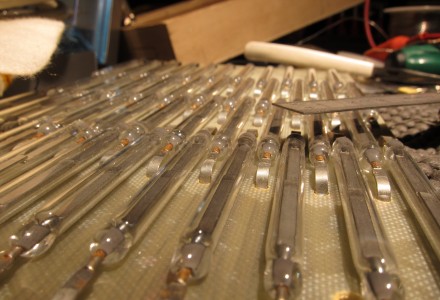 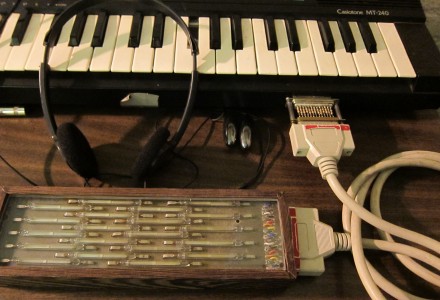 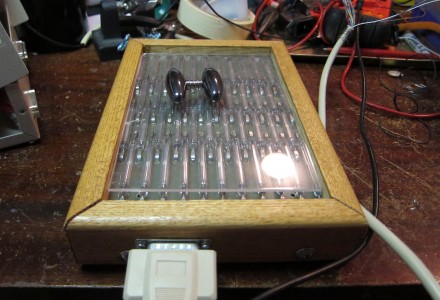 I built two Magnetic Casios, and each has a unique controller. The first keyboard uses the pre-existing traces from the reed board (cut in half) and wired to a DB-25 connector, so you can plug in the bending matrix as an auxiliary tool. When I opened this keyboard up again in 2010, I was pretty stunned at my then nascent soldering skills. It’s a miracle I pulled it off. While bending it, I sort of blew up the piano sound—I think from accidentally pulling off a circuit trace while the power was still on. Okay… pretty bush-league, but it actually made for a beautiful, if unintentional, mod, in which the piano is replaced by a clicking sound, which registers syncopated artifacts when combined with other tones. Somehow the thing works, even though I made every bend without using low value “safety” resistors to protect a fatal short circuit. When I revisited the keyboard, rather than moving any of the bends around, I just went ahead and made a 15 ohm safety connector for the DB-25 connector as a little additional piece of protection. So far, so good.

The second keyboard uses a different method. I realized that my surplus reed boards were laid out in 11 columns and 4 rows—if I cut the PC traces, I could wire up my own 11×4 matrix, which would fit quite elegantly on a DB-15 connector. Cool. I went ahead and built the thing inside an oak frame, and this time made a test cable to explore for the hot points inside the MT-240. This was very useful for swapping out different resistor values (for many many many subtleties of sound!), and at the time I guess I hoped to be able to use the reed matrix for future projects.  One notable feature: I used capacitors for circuit bending, which means that many of the bends are time-sensitive! While testing, I realized I had made a goof in the design. I thought I’d be getting 11 ins and 4 outs, which would be 44 possible connections made. But because of the way the reed switch works, the magnet actually connects point along the input bus as well as to the output. (eg, if two magnets are over 11A and 5A, points 11 and 5 are also connected.) This yields many, many more connections than I had planned, and so it’s really hard to be sure of what’s happening when the magnet is over the matrix. Actually, the magnetism is unpredictable—you never know which reeds are being activated. In practice, it almost never happens that you achieve the same sounds, but the entire system has a gestural predictability. 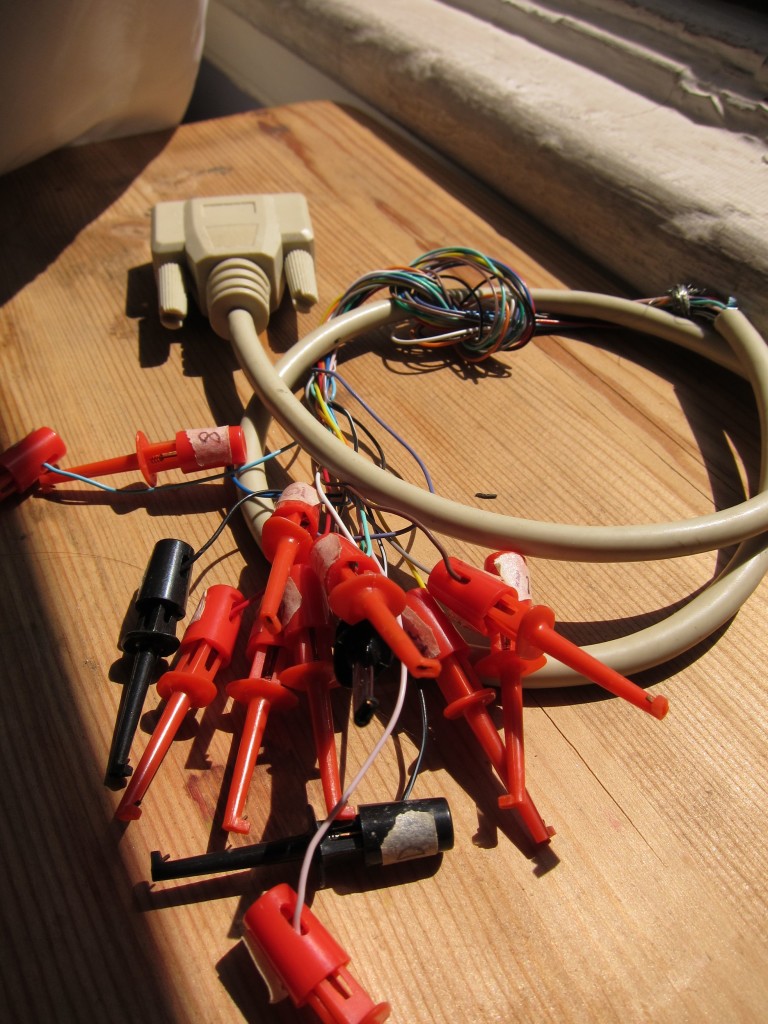 That’s the test cable. I really learned a lot about repetition and soldering technique by doing this project. Each keyboard also has a clock mod which was designed by Pete Edwards, who has also done some pretty exciting work with this machine. The keyboards can sync together without tempo drift by running off the same crystal.

Keep these magnets away from your hard drive!

I stopped using these keyboards in the mid oughteens. Gradually they fell from studio piece to living room piece to closet majesty. In 2015, when I moved back to Philadelphia, I wrapped these keyboards in up bubble wrap, and they remained sealed for 2 years. In 2017, I lent one of them to my friend in tinnitus Kuhn,  https://soundcloud.com/kuhnmusic, that he might sample them for nasty jungle dubstep music.