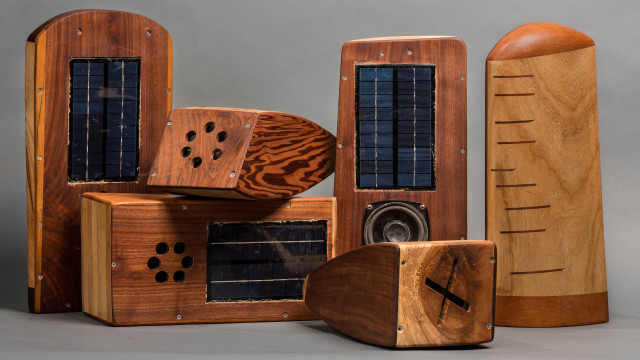 In 2017, I started to explore solar power, a concept often utilized in circuitry, though not as frequently in music.

A Solar Sounder is a synthesizer played by sunlight. It works opposite from just about every other circuit you might encounter. Solar Sounders have no batteries, and no knobs; instead, its speaker output is governed by sunlight, powering an internal synthesizer that is designed to work with ever-fluctuating power source. The goal is not to conserve charge, but to make music.

My good friend and wizard Peter Blasser designed the initial circuits for a family of solar instruments that emulate natural sounds. I was moved by the poetic potential of these instruments and subsequently began working on my own family of solar circuits. Peter’s solar sounders were all housed in cardboard, however I saw the design potential to make more permanent machines that could live outside for a very long time. Some of my first solar instruments used Peter’s circuits, and as I continue to work on this project, new circuits live on. 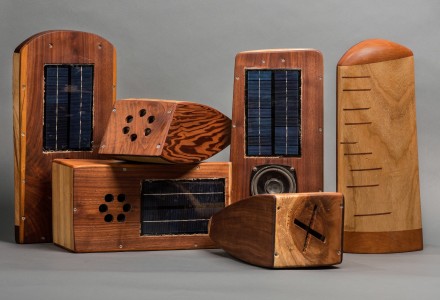 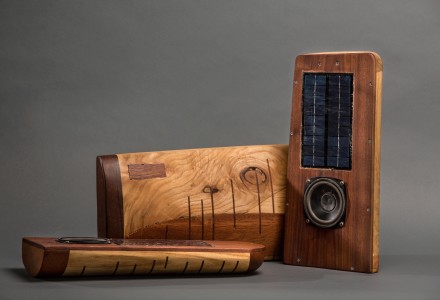 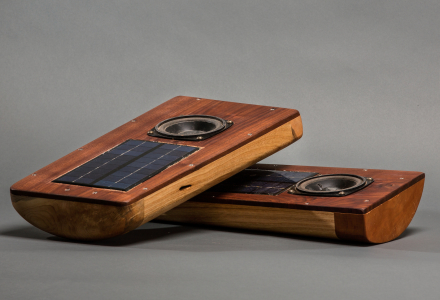 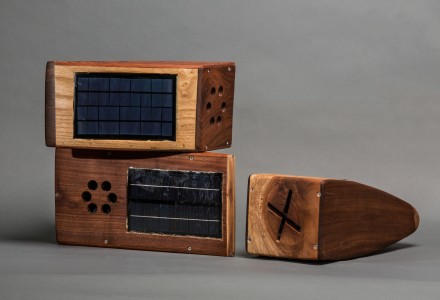 I built these curved wooden enclosures to stretch my limits in woodworking, and also to dream up lively, active forms, that hopefully seem more animated than boxes. I also built them a little chicken coop from walnut and catalpa, so you can quiet them down in the shade.

By itself, a Solar Sounder by itself is a crude machine, but in a group, they come to life, twittering away merrily, their songs changing as the day passes. These instruments suggest different approaches to the traditions of electronic music—for example, multi- channel installation typically concerns the expert, calculated routing of signals for beneficial acoustical results. Solar Sounders offer a novel approach to live-diffusion: instead of twirling a knob to move a voice in the sound-field, you just pick it up and move it around. Thus, these instruments encourage one to hear the nuances of their surroundings.

As global warming looms, it threatens the structures we rely upon so heavily. These days, it’s easy to imagine the most dystopian future scenario impinging itself upon our way of life. Imagine a grid-less country. What would happen if a solar flare wiped out the communication systems we depend on so dearly? What happens if a nuclear explosion destroys the power-grid? How will we survive? And how will we make electronic music?

When I first assembled Solar Sounders using Peter’s circuitry, I was so thrilled to discover an entirely different way of doing electronics—most circuits depend on a very consistent voltage source or some way of regulating the voltage for correct operation. These instruments don’t do that. (Are they even instruments, or materials for sound installation, or rather little creatures?) So, making solar circuits is really about treating the sun as an active character, thinking about what it does and how you can use it…let’s make electronic music everywhere, not just the studio, and forget about those knobs…

Anyone can make a Solar Sounder. Here are some descriptions and schematics of my circuits. Feel free to get in touch if you want to build your own—I’ll send you a circuit board! 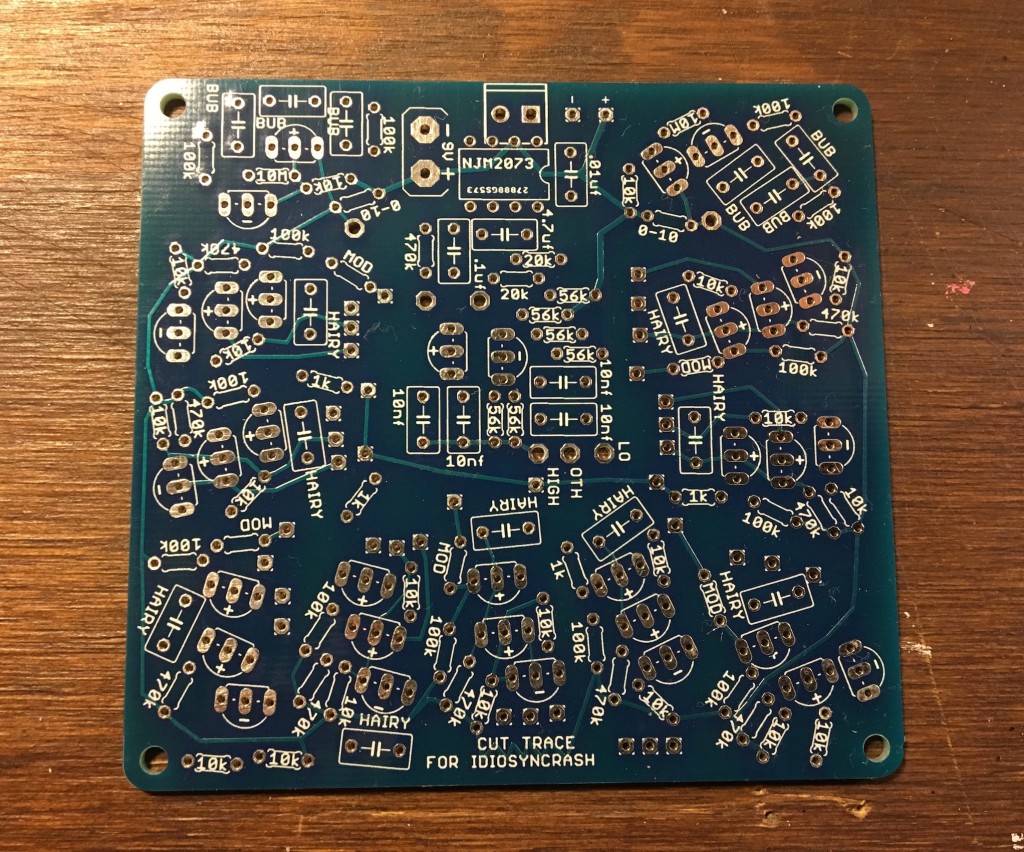 Fluffernuts was my first solar circuit—I built it after making about 12 of the Blasser Solar Sounders. I was curious about a cluster of relaxation oscillators, and wired them together in a very intuitive mess with wires and resistors going into sensitive nodes, until they made the classic sounds of electronic music (ala David Tudor). I really liked the squiggles, but I needed a way to induce dynamics into the circuit, so I took all of those oscillators, strung them together, and modulate their power rail with two low frequency sine wave phase shift oscillators, which feed an output buffer that drives the rail.  Since we’re already dealing with crazy power fluctuations, let’s go nuts, and design even more power fluct into our circuit! The “cut trace” detail on the schematic means you can separate these power rails in two with a dremel, for two independent LFOs. In practice, the severity of this effect can ruin the circuit dynamics, or work just fine. Different amounts of light cause the “voltage starve” circuit to hang up or modulate. I’m still tinkering with this circuit—you can hear three totally unique versions of it singing in the short video above. They took a long time to build, because I would just solder a resistor into a feedback loop, and then walk into the sunlight to listen to the resultant music. but in result, the wonderful instruments are just full of character. Soon, I’ll professionalize these decisions on the PCB with copper, but for now, this circuit is the intermediate circuiteer’s dream come true. 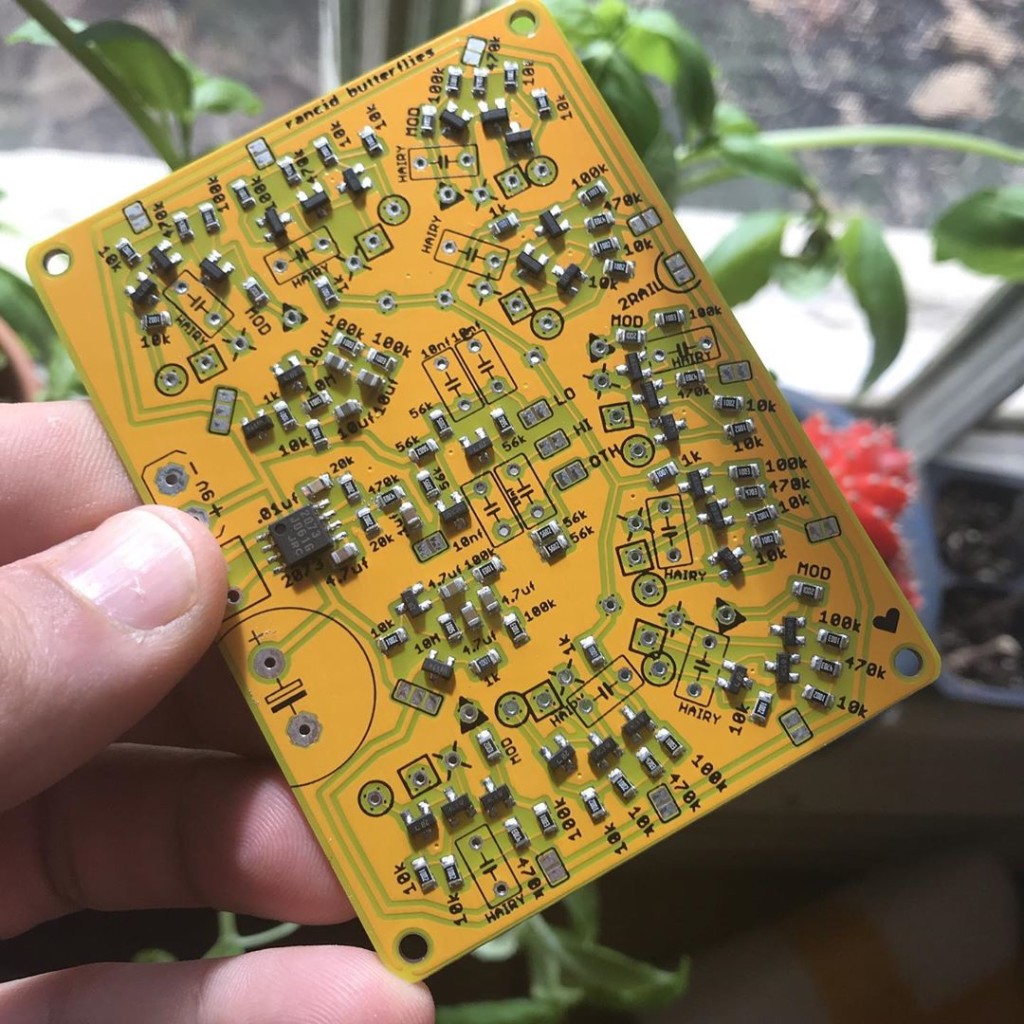 This is the same circuit as above—but it works way better. I utilized “surface mount pads” to connect different oscillators and also to separate the power starve rails. i also added little decals to label and separate the different inputs and outputs. so this circuit is “programmable” in the Robert Pease way—just use capacitors to select your note choice, patch up a bunch of jumper cables, and whip out your soldering iron to choose which oscillators you want to activate. Wow! 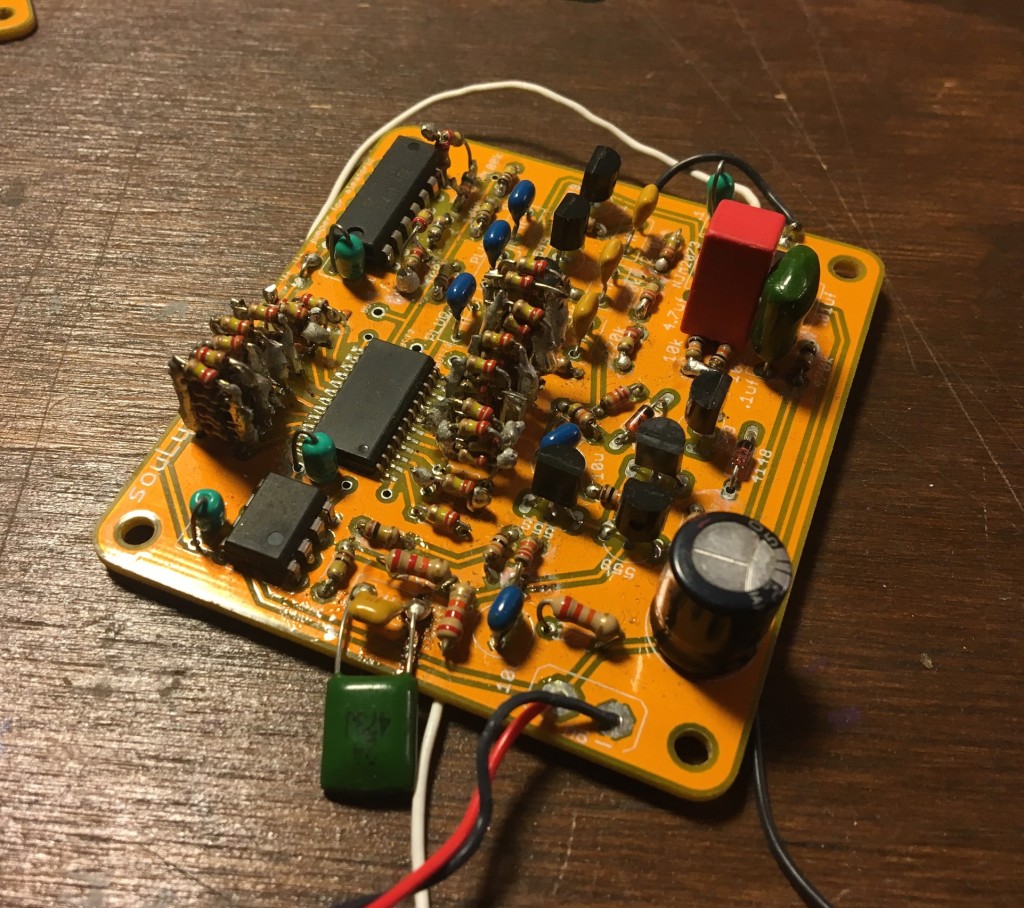 Well, this one isn’t really an original circuit. But it is a very cool riff. I wanted to transform one of Peter’s “paper circuits”, which are synthesizer plans that he released for the DIY community. I was curious about the “gerassic organ”, so I added to it a speaker amplifier that works well in the sunlight, miniaturized the multiplexor, and also replaced its buttons with an “aleatoric” section—a series of classic lofi squarewave oscillators activate the multiplexor’s binary input and VCA. This version above is built a little bit “off the board”—I realized I could make a very poorly tuned simulation of the harmonic series with paralleled resistors.

In practice, this circuit might need a little more than the 9V 200MA solar panels I’ve been using. I experimented with upping the current capacity by using panels in parallel and using some supercapactitors—This helps keep the circuit working without going squawky. The supercaps are a little bush league…they kind of kill the “in between states” of sunlight. But it’s also nice to compose for their gradual shifts. In other words, they will not be so responsive if you wave your hands in front of the solar panel, but they will still change music throughout the day.

update! i made a surface mount version, with all but the musically critical components assembled by the factory! 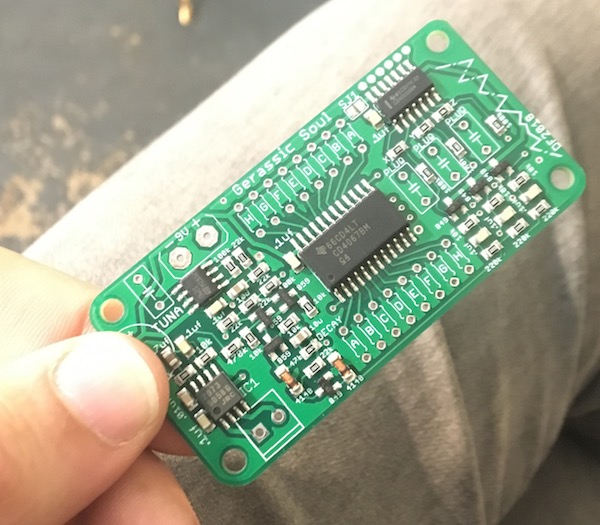 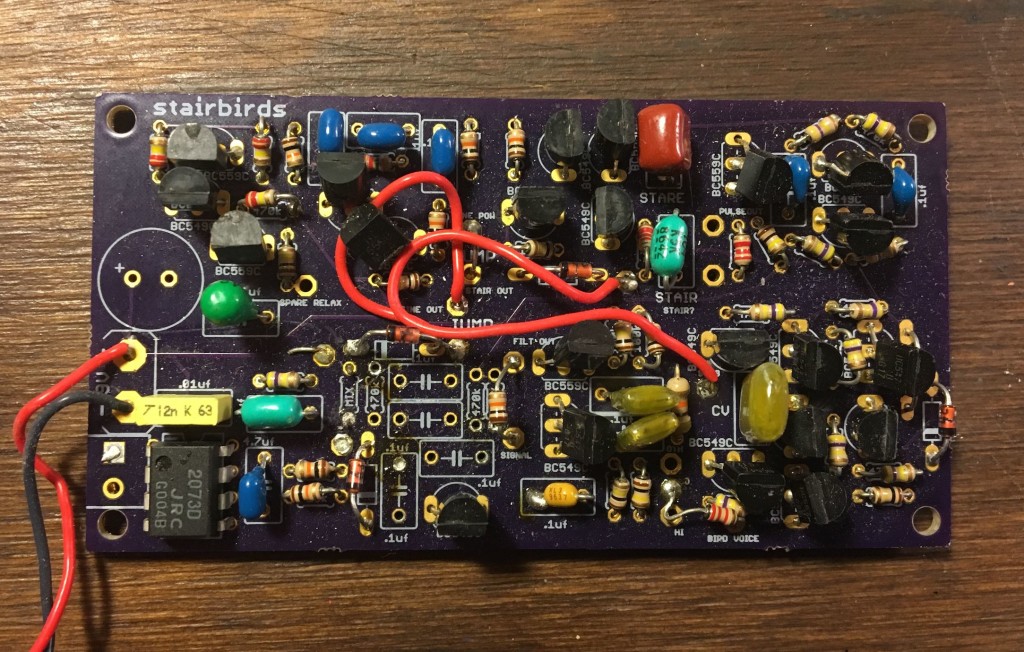 Stairbirds simulates the call of the mocking bird. Well, I think I designed the prototype too soon, because it doesn’t work yet…we’ll get there someday… 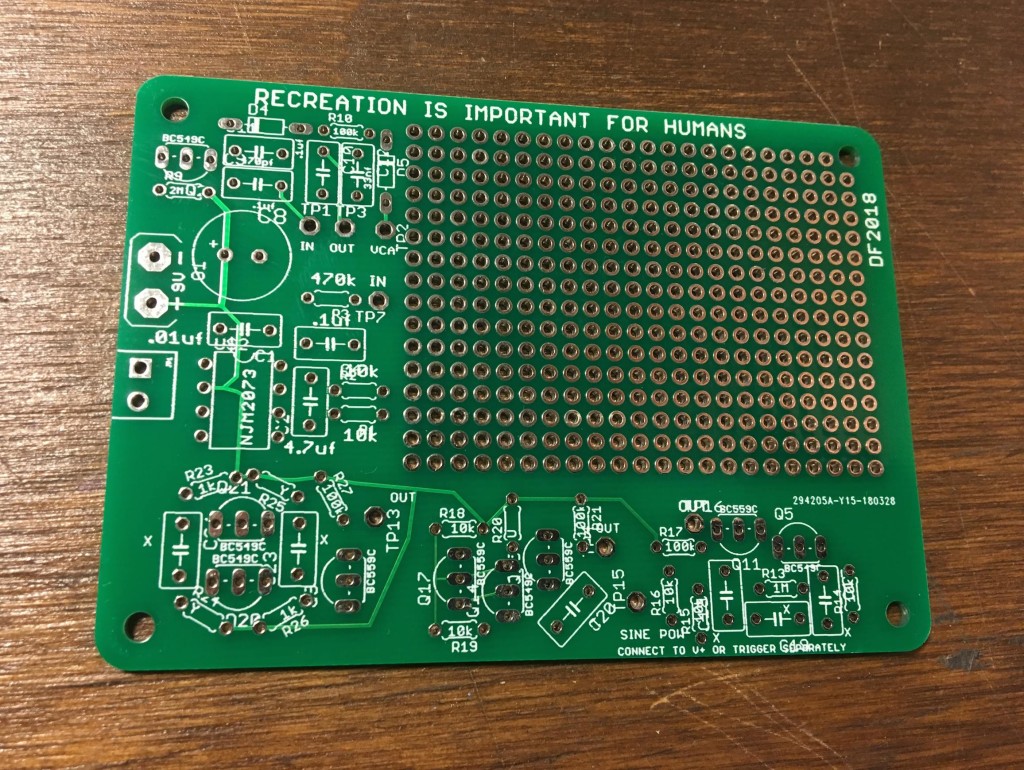 I made this test board to make a convenient way to prototype solar circuits. It includes a couple of oscillators, an amplifier, and a crude VCA I haven’t gotten to sound good yet. The prototyping area is just kind of like an expensive perfboard. Maybe this was a little too luxurious—in practice I haven’t used these more than twice. But notice that the sine wave oscillator has that classic discovery of Peter Blasser—the collector resistor of the NPN amplifier can be patched to anything, instead of running to power, and thereby you “ring” the oscillator like a filter. Try it! My favorite of Peter’s solar discoveries.

Ocean Waves simulates the sound of the waves lapping upon the shore.

Playing in the Desert

Well, California was strange…After building the Solar Sounders, I had two directions to explore: my own circuitry, but also, what to do with these spritely creatures, singing every day on my balcony? I made this project with my classmates in Shahrokh Yadegari’s graduate seminar, Crossing Boundaries, at UCSD. (I’ll still never really understand why I went to California, and what I did there….Anyway….) We climbed atop a mountain with power lines, and did a little renegade filming. It was an amazing afternoon, and a truly sweet experience shared between friends. But I feel like this piece bears the unironic silliness of “doing too much art”. The moving around, playing with the Solar Sounders—wearing black in the sunlight—and the cactus—my god—it doesn’t add up for me. Though, I think this failure is actually quite important. I think the Solar Sounder is already cool enough—you don’t really need to dance with it, or wave your hands in front of it. It’s already a dance, it’s already an instrument—you don’t have to play it for it to sing for you. My subsequent solar outings have been more matter of fact—just pick them up and move them, don’t make it precious—don’t get in the way of the music. But, if you want to build some solar sounders and dance at sunrise, though, don’t let me stop you!