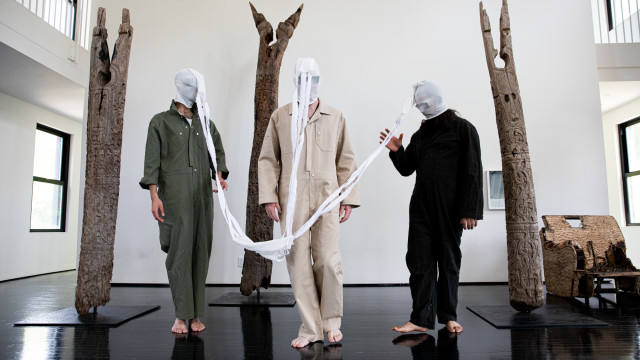 The Daxophone Consort (or simply, The Consort) is Daniel Fishkin (me!), Cleek Schrey, and Ron Shalom. Since 2015, we are the world’s only extant daxophone consort—an ensemble made entirely of members who play the same instrument. You, perhaps, already know that the daxophone is a thin wooden strip played with a bow, which was created by the German improviser/inventor Hans Reichel in 1987. The instrument’s sound, somewhere between a cello and badger, ranges from furtive gurgles and delicate whistles to wild screams.

The Consort has been active since 2015. After a decade of solo experimentation on the daxophone, I began to build daxophones for others, testing my design skills by sharing instruments with my collaborators. This band formed organically, and a shared ensemble sound blossomed. We develop realizations of historical experimental music and baroque motets, commission new daxophone pieces from living composers, and generate new pieces based on shared improvisational grammar. 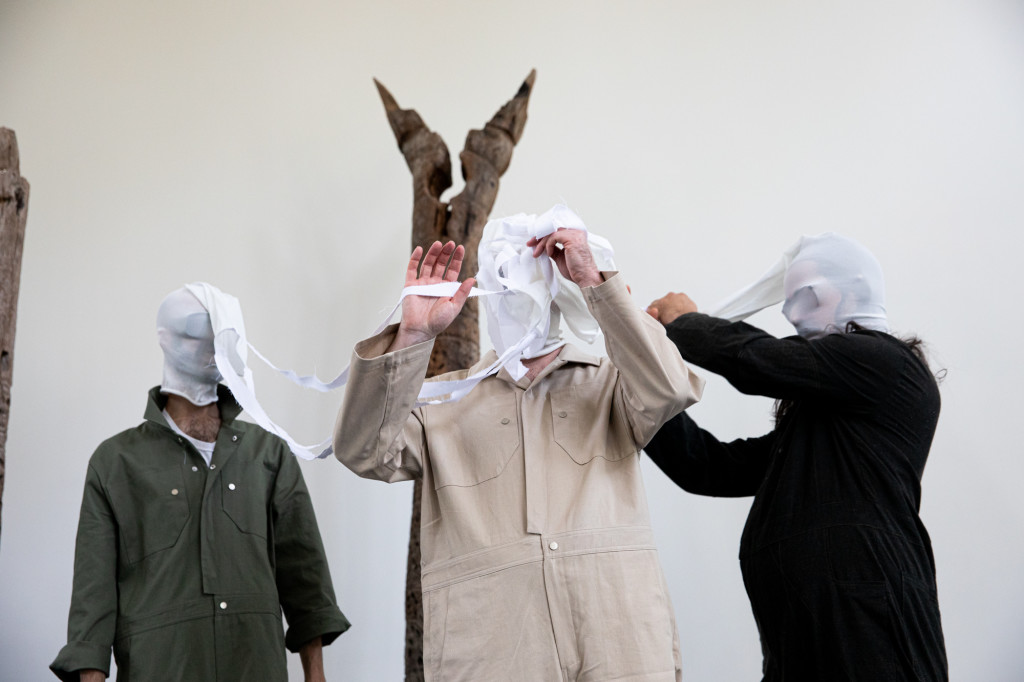 In 2019, the Consort went to Long Island, for a residency at Watermill Center, under the auspices of Robert Wilson and his beautiful mecca for avant-garde research. I built so many daxophones there that summer…and we played for days and days. One of the most striking things about Robert Wilson’s mecca for the avant-garde is the collection of incredible craft objects housed there. During this residency, you eat out of centuries-old bowls, and live with these incredible artifacts from all over the world, which coexist alongside modern sculptures, such as the wonderful set design for the famous Einstein on the Beach (also designed by Robert Wilson). Soon, you begin to look modernist forms and see them as ancient craft, and vice versa! I feel this shares a real resonance with the daxophone, which at once is completely new, and thoroughly primal.

At the residency, the Consort began to seriously explore not merely just playing music together, but infusing every aspect of our work with intention. We developed costumes to provoke a kind of reciprocal choreography. We researched Japanese ghost lore. We studied Renaissance counterpoint and Earle Brown. We entered the nether world 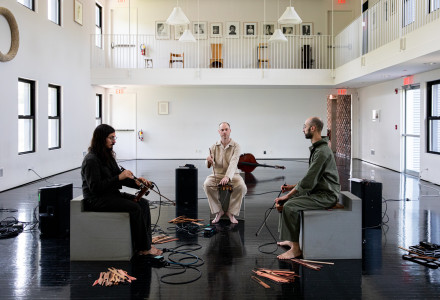 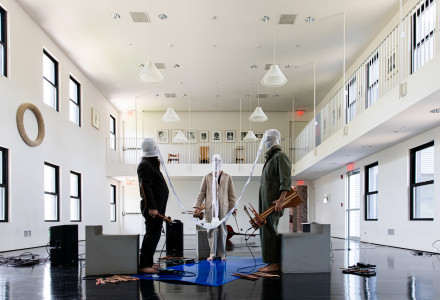 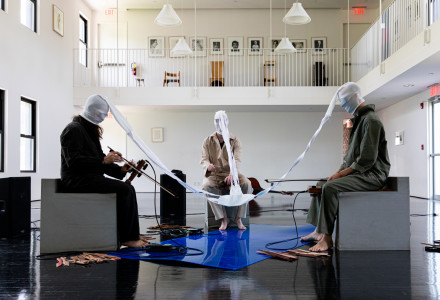 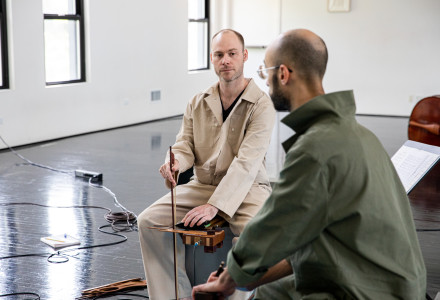 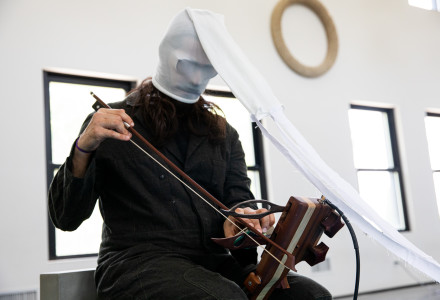 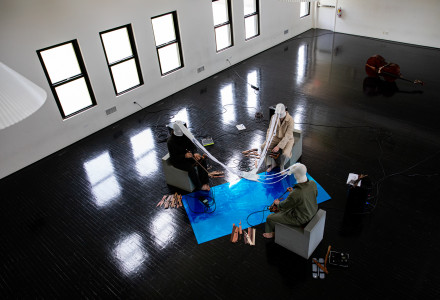 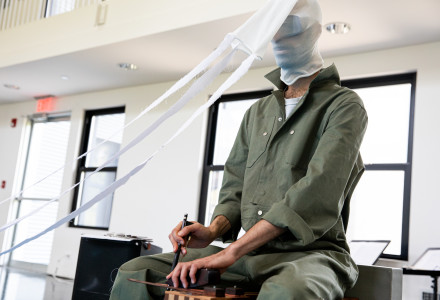 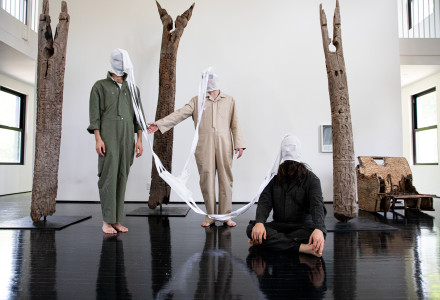 Maybe it’s best if you just look and listen for a bit?

While at the Center, we also connected to the Southampton community many times. Above you will see a brief excerpt from our “Family Day” instrument-building workshop for children. Below, our performance Red Birds was a featured curated event, repeated twice over the course of the 2019 Summer Program, at the Watermill Annual Gala Tabula Rasa and also at Discovery Day. Costumes designed by Yashi Tabasumi and Cleek Schrey. 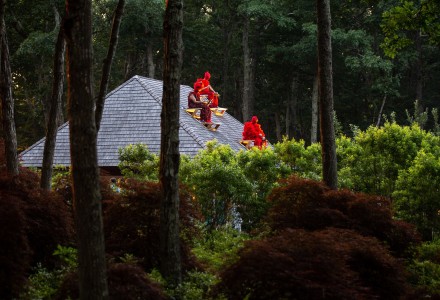 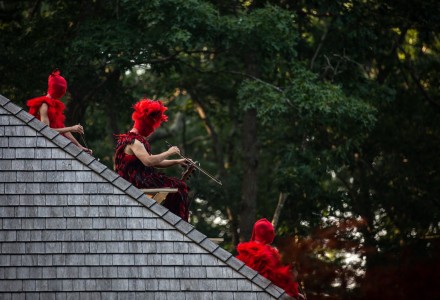 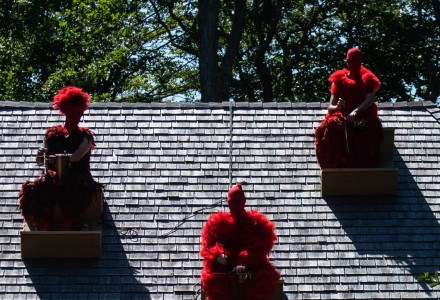 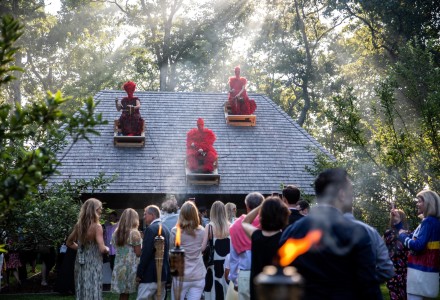 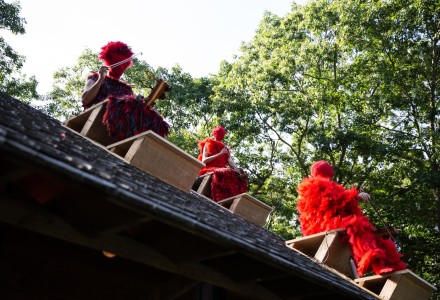 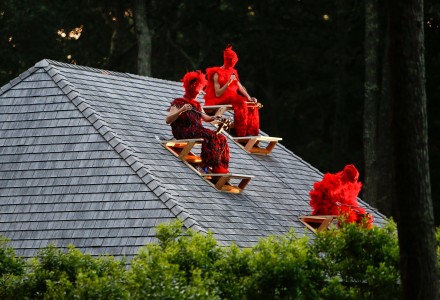 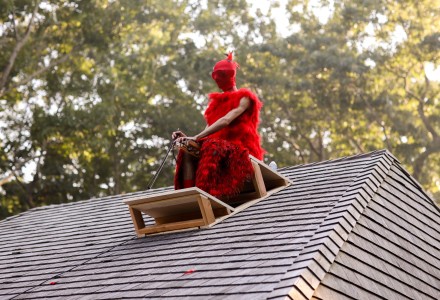 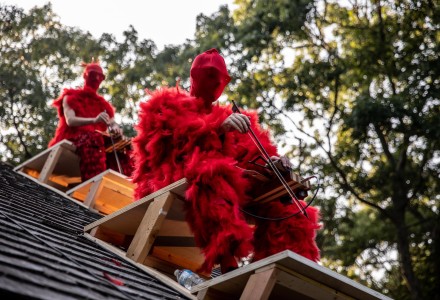 In late 2016, the Consort approached Alvin Lucier with the idea of composing a piece for daxophones. To begin this process, they met to show him the instrument. Lucier immediately asked, “Have you ever made one from Pine Bark Beetle Wood?”, for his cabin in Colorado was lined with heirloom pine floorboards pockmarked by insect damage. Lucier wanted to hear how the sounds of the daxophones changed from wood to wood.

Fishkin, Schrey and Shalom met with Lucier six times since 2016. Earlier versions of Lucier’s piece utilized bowed long tones of precisely specified pitches. However, the piece has transformed with every encounter. In its final version, the most fundamental accessories for playing the daxophone — the bow and the curved block for changing pitch — have been removed. Only the essential acoustic feature remains: the tongue.

The score for Hard Wood begins:

“Four players tap daxophones. Each player taps the wooden tongue of the daxophone with their fingertips with one hand, while damping it with the other. During the course of the performance, the acoustic characteristics of the daxophone, under continually changing conditions, are revealed.”

Instead of being bowed, the wood is beaten, and from within a thicket of thumps, we occasionally seem to discern competing polyrhythms. Yet these discrete temporal relations seem almost beside the point. Perhaps Lucier’s composition is best approached as an environment. We are in a grove of high stumps, surrounded by the ricocheting knocks of woodpecker beaks. Rather than any clear counterpoint or timbral design, what we hear is the beating of an impossible forest, one that exists nowhere in nature, its woods coming from disparate corners of the globe.

“Ryoanji is a rock garden in Kyoto that John Cage visited years ago. Fifteen stones are placed on raked sand. Visitors come to this rock garden and simply sit and look. After visiting Ryoanji, Cage made a series of pieces called Ryoanji (1983-1985) for various instruments, including flute, oboe, trombone, double bass, and voice. The notation consists mostly of slides, glissandos. Cage collected fifteen stones and traced their shapes with a pencil on music paper. He said that the five line staves were the ‘area of the garden.’ There’s a percussion part, supposed to represent the raked sand. For some reason this music seems to exist out of time. It’s difficult to place it.” (Alvin Lucier, Music 109)

Ryoanji is the first piece of music that the consort members ever played together. John Cage never composed for daxophone, but the instrument might help to capture the essence of the piece. The daxophone is resolute in its refusal to intonate precisely. Thus, the attempt to produce a linear glissando produces a notched gurgle, a broken curve that might resemble the outlines of the rocks.

Psychoanalyst Monroe Street writes: “Lucier, curiously, describes the percussion part of Ryoanji as “uncanny.” Nature returns in the uncanniest of ways in Cage’s work — as timbre, and also as temporal repetition. The cycling form which haunts his Ryoanji is Cage’s retracing of the spatial contingencies that for him composed “nature.”  Ambling around a Japanese rock garden, he stumbles upon some stones in a sandbox, draws their configuration, and superimposes this design on a musical staff. Rather than sprinkle sand in children’s eyes, the uncanny composer plants rocks in our ears.”