thanks for taking the time to look at this. this page covers three major areas of my artistic output: the aesthetics of hearing damage, the translation of light to sound, and many experiments with the daxophone. i have made this page because sometimes, pictures or videos describe the work more clearly than my musical scores, though they are also provided when appropriate. if your time is limited, please limit your viewing to one project from each category. if you’re curious, i’ve also included an appendix that includes interpretive work, and other projects that don’t fit the categories described above.

I want to make music that makes tinnitus desirable rather than hated or feared. I do not want to get used to my hearing damage—I want to use it. During a residency in 2011, I created a system of tensioned twenty-foot long piano wires activated by mixer feedback; I could sustain its tone infinitely, using guitar pickups and pressure transducers to coax the strings into vibration. I called it Lady’s Harp, named in tribute to Ellen Fullman, Maryanne Amacher, and the ancient Greek Aeolian harp, whose strings are set into vibration by the wind. I have made five iterations of Lady’s Harp, and in each version I connect the strings to the walls or floors, turning the room into the instrument’s resonant cavity. Once I showed the piece to a neuroscientist, and she remarked that it functioned as a mechanical model of the inner ear. I had stumbled upon the perfect vehicle for Tinnitus Music.

This version of CTTS was presented in Philadelphia, PA, Fall 2016, as a part of a project grant from the Pew Center for Arts & Heritage. It showcases a semi-improvised, collaborative composition made by myself, Ron Shalom, and Cleek Schrey. Our work included the conventional sequencing of materials in time, collaborative modification of my instrument Lady’s Harp, improvisation, and determined/theatrical changes to the lighting design to anchor the composition.

I had never combined the Lady’s Harp with conventional instruments before 2015. I spent my final year in graduate school with Shalom and Schrey, and during this time we developed deep trust and conceptual rigor. This piece was composed through a process of iterative improvisation, keeping the parts that worked and recycling material. While experimenting, I found great synergy with Schrey’s Hardanger fiddle, whose sympathetic strings resonated beautifully with my Lady’s Harp. But though it was beautiful, I feared that it was no longer Tinnitus Music. Shalom is a conservatory trained bassist with perfect pitch, and the unevictable desire to challenge his classical training through weirdness. The manifold overtones of our combined instruments thwarted and challenged Ron’s sense of pitch. Instead of resonance, Shalom brought confusion and theater, which rescued our music from being merely sonic exploration. After all, can we even trust the ear, now rendered unreliable, for specific pitches? 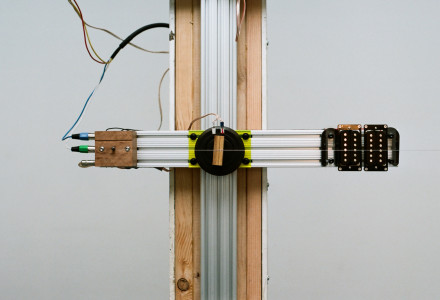 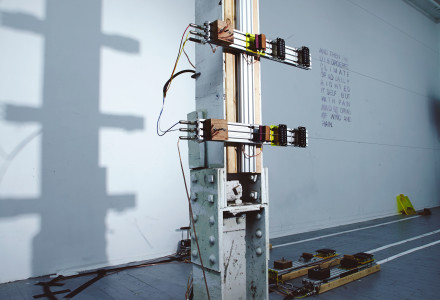 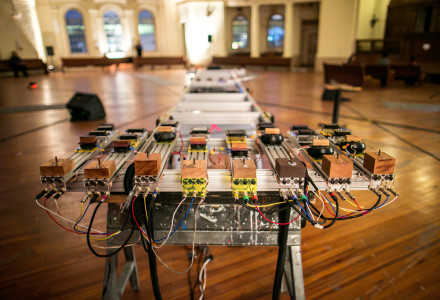 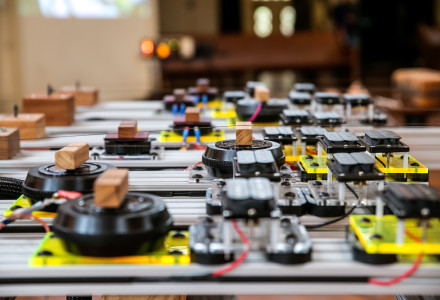 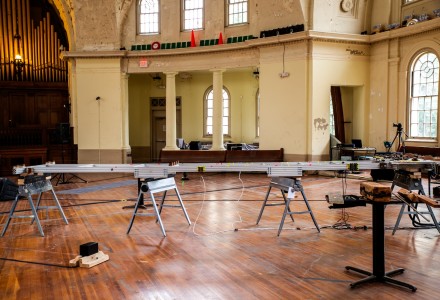 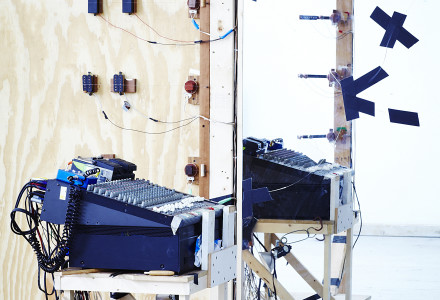 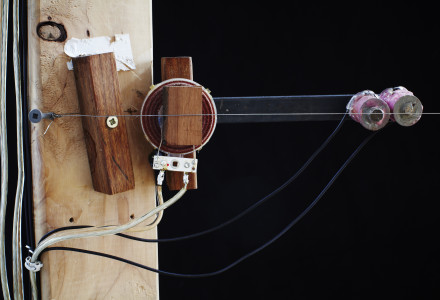 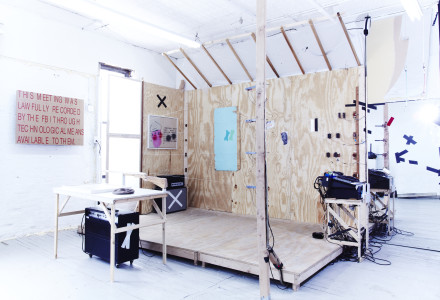 This piece is a transcription of an earlier work, Composing the Tinnitus Suites (2008-2011), which I created on the Lady’s Harp. I wanted to test whether I could make work in the series of my Tinnitus Suites project, but without needing to do a site-specific sound installation. Also, I felt the original recording calling to me in its tonal clarity. Using Fourier analysis, I approximated the harmonic content of the Harp’s strings and transcribed it for the six instrumentalists of ensemble mise-en. This work could have been done more quickly with a computational process, but I did it all by hand, and savored the chance to slave over each measure. Though I used my computer to do the Fourier analysis, I only wanted the ensemble to play what I was able to hear, and bear responsibility for the notes I selected from the spectrum of the original piece. 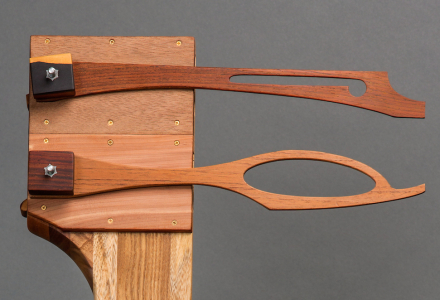 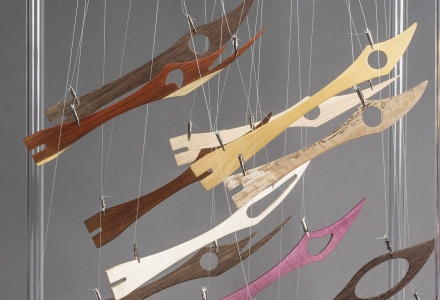 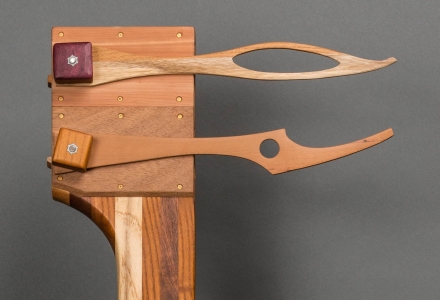 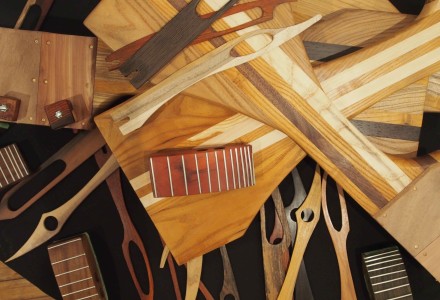 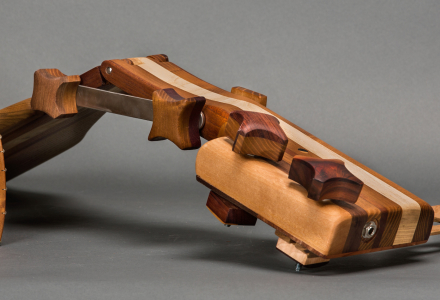 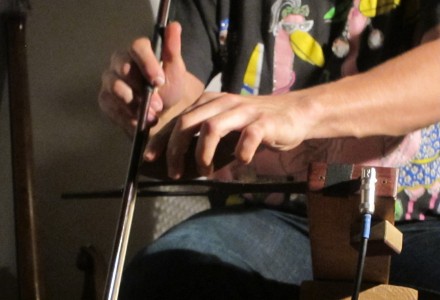 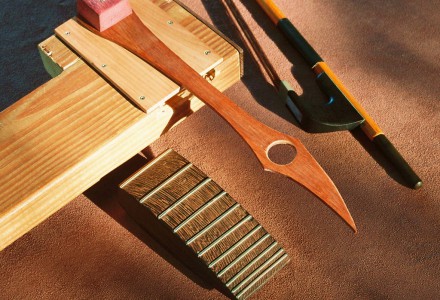 most of these are scroll sawn.

My entry into experimental music started with the daxophone. The daxophone, created by Hans Reichel, is a more elegant construction of the instrument every child discovers when they put their ruler off the edge of their desk and pluck it: BOING! When that ruler is played with a cello bow, it produces a much different sound: a very vocal, vowel-ed tone that could easily be mistaken for another instrument or animal. One cannot buy a badger-cello, so I learned to build my own. I noticed that every piece of wood sounded unique, and I could control the instrument by altering its shape.

Since 2005, I’ve always built daxophones in my itinerant workshop, meaning, wherever I happen to be, with a slew of hand tools and whatever else is in front of me. This process has changed a lot over the years, so this is what it looks like today. In 2019, a residency with The Daxophone Consort (Cleek, Ron, and me) brought me to the Watermill Center in Long Island, NY. The residency was a focused time for playing together. As the days passed, I made sure to spend at least a few hours in the daxophone workshop.

A consort is an ensemble whose members all play the same instrument. Since 2016 I’ve been working with a consort of daxophonists to stretch the boundaries of what is typically possible on this instrument. Ron Shalom and Cleek Schrey each bring a personal history of string techniques to the daxophone, including the conservatory and old time music. We are currently the only known extant daxophone consort!

No-lone Zone is composition for daxophone based in an interpretative language of sonic cues. There is no linear structure, and improvisation makes up build of the material, yet a shared language guides the music to and fro. There are a number of “audio logos” which performers can recognize in a thicket of activity—a forte pluck or whack of the daxophone, a endlessly long glissando up (or down), and a fast col legno tremolo of the bow trilling against the wood of the instrument. These calls tell the other performers that it’s time to end one section and begin another. The changes occur when all players perform the cues in unison—thus, a player can prolong the current musical moment by refusing the cue.

Composed for and performed by the New Perplexity Daxophone Quartet!

This is an older composition that showcases early work with my now defunct punk band, Dandelion Fiction. Songwriting isn’t part of my current work, but  where my roots are.

I went to Times Square with some homemade light microphones, and listened to the light waves. Many electronic lights are actually flickering off and on faster than the eye can see. In the place of a normal microphone, the photodiode lets us hear this flickering as pitch. What you see is what you hear, with no special effects or processing added. I don’t usually like being in a place like this, but the sound camera has a transformative power, like the skateboard, which turns the parking lot from urban wasteland to paradise.

One day at my workbench, I realized that the green CRT bream of of my oscilloscope is a very stable sawtooth waveform.  I used my photodiode pickups to sonify this signal, and then built an entire synthesizer system out of four oscilloscopes and a mixer. By sending the same signal into both mixer & oscilloscope, a feedback path is made entirely in the domain of light, between the screen of the CRT and the photodiode microphone. The oscilloscope shows its own sound, and as I manipulate it, I learn from its visual language in order to predict its music.  I send my voice into the oscilloscope beam, which translates it into light and then back into sound once more.

The most recent iteration of the Dead Lion project has involved sampling the music of Dubstep DJs. I theorize this project as a band, but it is “dead” — I do not do songs and each performance is a zombie improvisation in which I stagger around for the audience, with no central Urtext. This principle held firm until just recently, when I broke my “no songs” mandate in light of the recent political situation, which compelled me to search for a text, and led me to dance music. I am not an insider to dubstep — I treat this music as a found object, similarly to way I interact with the oscilloscopes. The rhythms disrupt the light beams, giving form to the music.

Steve Reich’s Pendulum Music is a classic feedback piece from the early days of minimalism and process music. Old pieces of the avant-garde can seem dusty, but feedback, which is unique in each instantiation and each resonant cavity in which it is found, should never actually get old. I wanted to add another wrinkle in the story of this piece, and so shifted the medium from sound to light. Instead of speakers, I use oscilloscopes, and instead of a microphone, I use homemade light microphones made from photodiodes. Besides this, the basic structure of the piece is unchanged.

I want to filter canonical pieces through my own lexicon. Ryoanji (1983) is based on the famous stone garden in Kyoto, Japan that contains fifteen stones of different sizes laid out on a bed of raked sand. John Cage wrote the piece for percussion obbligato, or an ensemble of twenty, and any number of soloists: oboe, voice, flute, contrabass, and/or trombone. The dry, repetitive percussion represents the raked sand. The solo parts are graphical scores derived from Cage’s tracing of various stones, so that all the solo parts exclusively produce glissandi. Cage never wrote any music for daxophone, but I thought that daxophone might capture the microtonal essence of the piece. The daxophone is resolute in its refusal to intonate precisely.  Thus, the attempt to produce a linear glissando with the dax produces a notched gurgle, a broken curve that might resemble the outlines of the rocks in the score. 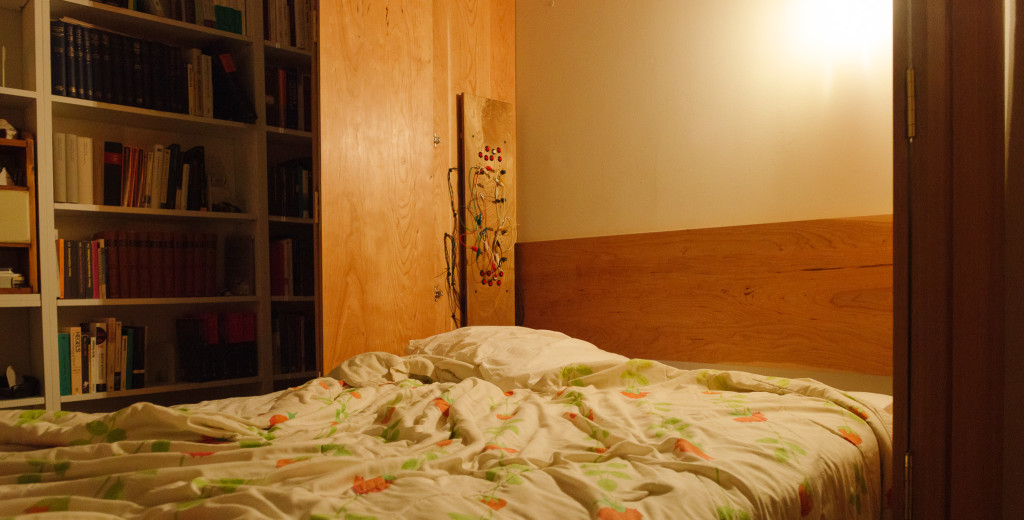 In 2011, I dreamed of making a circuit that would sonify the discovered plurality of a sexual encounter. The frame for this artwork was thus the bedframe itself, where many of my intimate experiences have occurred. I wanted to make a passive piece, one that would make music when I was with someone, but not require the gestures of an instrument. I didn’t want to put music in the background, but rather allow it to be absorbed by the larger, more glacial pace of our every- day movements over many months. But I wasn’t in a relationship at the time—it occurred to me that most of my nights were not spent having wild casual sex, but being by myself. I wanted to make a piece that would sound when with a partner, and would be silent when I was alone.

I finished the circuits for this piece in 2014, but never made a public presentation of the work, which seemed too private to share. In 2015, I was commissioned by Room & Board to create a permanent installation of my Bed Piece. The original piece that I imagined—a one-year performance in which the bed synthesizer is turned on every night—remains un-performed. In keeping with the privacy of this piece, no sound or video is documented, only pictures and the suggestion of an idea. 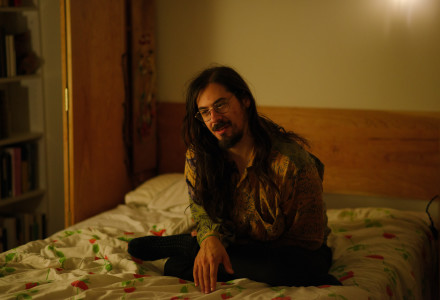 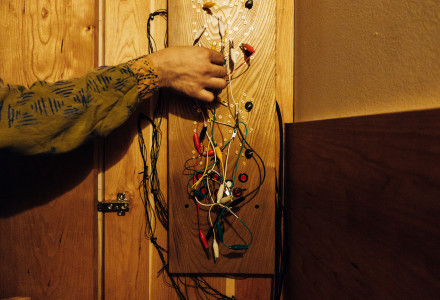 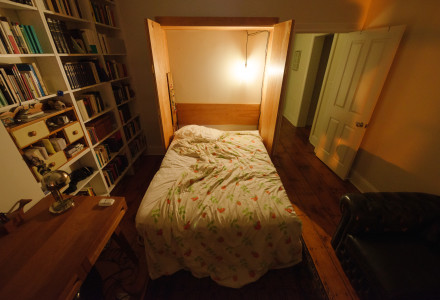 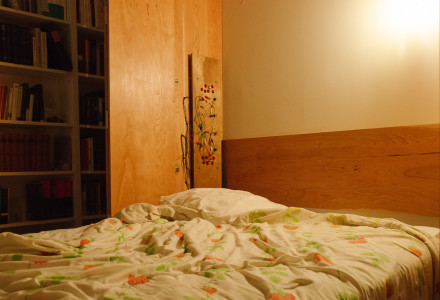 http://roomandboard.nyc/salons/bed-piece/   External documentation
Program from the opening of Bed Piece

I was inspired by Nic Collins’ circuit sculpture In Memoriam, but thought that he picked the wrong candle.  I designed my own circuit which is tuned to react to the flame of a candle.  In darkness, it is silent.  When the candle is lit, the circuit plays music which changes as the candle burns.  I used “five-minute candles”, which burn quickly and provide for a dynamic performance.

Thanks for your kind attention!